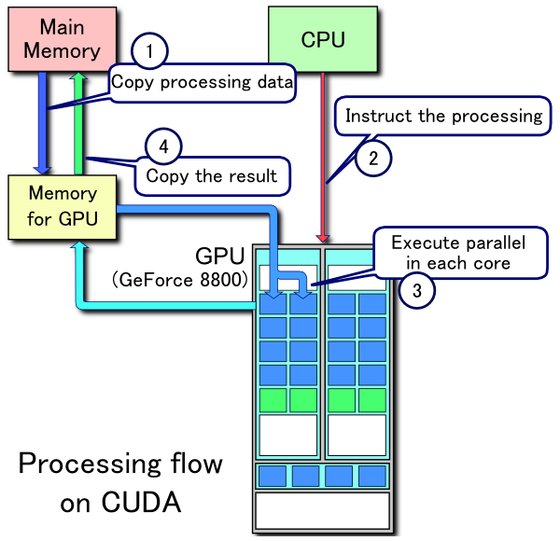 Tomorrow's supercomputers are projected to have a hybrid architecture. They will be clusters of fat nodes, each consisting of several sockets of multicore CPUs plus one or several accelerators (such as general-purpose GPUs). Programming of these hybrid supercomputers will be challenging, requiring a combination of programming paradigms. At the same time, one of the obstacles to good performance is the many types of data communication involved, more specifically, between the nodes, between the CPU and the accelerators inside each node. The newly arrived general-purpose GPUs provide tremendous computing power, but also bring extra difficulties with respect to parallel programming of these new devices. An ideal scenario will therefore be to have an automated code generator that translates input C code into output CUDA code capable of running on Nvidia GPUs. This master project will use the well-known compiler infrastructure LLVM to realize the above goal, with an additional objective of also extending the applicability to heterogeneous CPU-GPU systems.

Hybrid CPU-GPU computing for simulating calcium handling in the heart

The overall objective is to develop a precise understanding of the role played by disturbances of calcium handling in cardiac arrhythmias. In this master project, computer simulations on cutting-edge hardware (especially on clusters that are made up both both multicore CPUs and general-purpose GPUs) will be chosen as the tool. The candidate will implement high-efficiency simulators that are capable of hybrid CPU-GPU computnig, and also carry out physiologically realistic simulations.