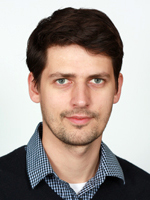 Mikolaj started working at the Institute of Theoretical Astrophysics (ITA) in the fall of 2013.

– What are you trying to find out in your research?

– I have just joined the team of Solar Physicists at ITA in their effort of making a breakthrough in our understanding of the solar chromosphere.

The chromosphere is a layer of the solar atmosphere just above the visual surface.

Above the chromosphere again we find the so-called transition region in which the temperature of the solar atmosphere rises extremely rapidly until it reaches millions of degrees in the Sun's outermost atmospheric layer; the corona.

The chromosphere and transition region contain important, and not yet fully revealed, answers to the question of how the corona and solar wind are powered. We know that, in addition to extreme thermal radiation, phenomena such as waves, electrical currents, and magnetic reconnection on the Sun may release substantial energy.

However, it remains unclear how much each of these factors contributes, how this depends on local conditions, and how the conversion of different types of energy happens in detail.

– We would especially like to understand the flow of energy and mass through the Sun's chromosphere and transition region, Mikolaj elaborates.

– The magnetic fields, density, and temperature exhibit dramatic changes in these regions.

– How do you go about trying to gain this understanding?

– A major part of our research involves making realistic simulations.

Because of the size and complexity of these simulations, they have to be run on the massive High Performance (HPC) systems equipped with hundreds of thousands of computational nodes.

– My research focus is on developing new parallel algorithms and codes for such Super Computers which would help our simulations to run with maximum performance and short time.

– Before coming to Oslo, I spend more then six years in Paris, France. In contrast to my French colleagues who prefer to travel south for their holidays, I have spent all my vacation days in the Arctic Circle. Therefore, I was very exited to find a job so close to my favourite latitude, where maybe it is sometimes a bit cold but luckily my research topic is definitely very hot!