From University of Utrecht, Netherlands 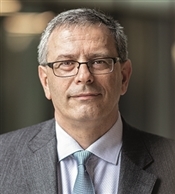 Observations in sedimentary basins affected by deformation show that the fault-induced depositional accommodation, at various spatial and temporal scales, is closely linked to basin kinematics. The tectonically-driven sediment infill displays the history of deepening and shoaling facies that are controlled by the activation of faults and changes in their offset rates. Simply stated, this results in shifting sedimentary facies towards the source area or towards the basin centre in response to increasing or decreasing depositional space. We propose a first principle conceptual model for tectonic successions, controlled by the balance between the rates of creation of depositional space and sediment supply. These sediment bodies are bounded by succession boundaries and comprise sourceward or basinward shifting facies tracts that are separated at a point of reversal. Due to the relatively steep slopes associated with the evolution of faults, changes in sediment supply rates and mass-wasting are common in these systems and may complicate the normal rhythm of the shifting facies tracts. Once tectonic quiescence is achieved, and if the basin is connected to the open ocean, eurybatic or eustatic base level changes may take over and play a greater role in sedimentary rhythm and cyclicity. We illustrate the efficacy of the new concept with a review of examples from extensional, contractional and strike-slip basins. We show that the basic tectonic succession model is applicable at all temporal and spatial scales and whether the tectonics cause subsidence or uplift, and in all types of tectonic settings that determine the evolution of sedimentary basins.