Geodynamic processes have influenced the evolution of the Earth as we know it today. The plate tectonics theory from the 1960s gave us the framework to understand the deformation and volcanism at plate boundaries. It allowed understanding surface plate motions, but did not include a mechanism to explain the dynamics of the underlying convective system caused by heat escaping from the core and mantle, and origin of intra-plate volcanism such as hotspots and Large Igneous Provinces (LIPs). CEED will explore the mechanisms linking surface volcanism and deformation with processes in the mantle and the core. A main hypothesis is that mantle plumes from the edges of stable areas with low seismic shear velocity above the core-mantle boundary can explain the surface distribution of most hotspots, LIPs and kimberlites. We also hypothesize that LIPs have caused most of the mass extinctions and rapid climate changes of Phanerozoic times. LIPs 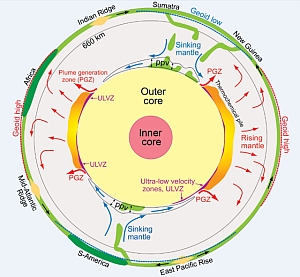 Deep Earth. Approximate equatorial section through the Earth with mantle flow.  The margins of the two antipodal Large Low Shear-Velocity Provinces (LLSVPs) under Africa and the Pacific are favourable locations for the episodic initiation of large thermal upwellings (mantle plumes). The LLSVPs consist of dense and hot material and are stabilized by the Earth's rotation. Dark and light green lithosphere is continental and oceanic, respectively. The main mantle circulation is shown by sinking regions of Mesozoic to present subduction (a broad belt through South- and North America, the North pole, the eastern half of Asia, Australia and the and the South pole). Counterflow of hot, ascending mantle occurs above the LLSVPs.

Earth evolution and dynamics are determined by interior heat production and the heat transport towards the surface. While the core heat is mostly transported outwards by mantle plumes, the sinking of cold, subducted plate material is balanced by a pervasive warm counterflow, transporting the mantle-generated radiogenic heat. Hot lithosphere is generated at the oceanic spreading ridges and efficiently cooled by hydrothermal circulation in the fractured ridge crust. Subduction of oceanic lithosphere is the main cooling agent of the mantle.

Structure and dynamics of the core-mantle boundary zone

and vertical heterogeneities and a very large vertical T-gradient of about 5℃/km. Two antipodal Large Low Shear wave Velocity Provinces (LLSVPs) beneath Africa and Pacific are prominent features identified in all shear-wave tomographic models and coincide with surface geoid highs. Thin (5-40 km) patches of ultra-low velocity zones (ULVZs) have substantially stronger (10% or more) seismic velocity reduction than the LLSVPs (~3%). The irregular ULVZs appear to be preferentially distributed along the margins of the LLSVPs and may contain dense material with high melt fractions. The  dense LLSVP and ULVZ reservoirs  could have remained largely isolated for most of the Earth's history and stabilized antipodally near the equator by Earth's rotation.

An absolute plate motion reference frame is crucial in order to link surface and Deep Earth processes through time — CEED scientists developed the first absolute global reference frame for the past 320 million years (Myr) by combining mantle and True Polar Wander (TPW) corrected palaeomagnetic frames. Their hybrid plate motion frame led to the findings that most LIPs and kimberlites of the past 300 Myr originated by plumes from the edges of the LLSVPs — the Plume Generation Zones (PGZs). Deep-sourced active hotspots also project radially down to these PGZs.

The correlation of reconstructed eruption sites of LIPs/kimberlites with the PGZs indicates long-term stability of the LLSVPs, but whether the two LLSVPs have been located in the same places before Pangea assembly and perhaps throughout the Earth’s history, is debated. Steep margins and thick LLSVP piles require moderately higher density and bulk modulus than the ambient peridotite composition-dominated mantle. Basaltic material has a high Fe/Mg ratio and density as well as high bulk modulus — but peridotitic and komatiitic material with elevated Fe/Mg ratio also satisfies the density requirement.

The nature and origin of the dense material has direct implications for the age and evolution of the LLSVPs: Basaltic material accumulation could have occurred slowly over 4000 Myr by separation from subducted lithosphere. In contrast, emplacement of Fe-rich komatiitic or peridotitic material would have occurred soon after Earth accretion, either by final solidification of a lowermost mantle magma ocean or by sinking of dense material, e.g. from the upper boundary of the transition zone (about 400 km depth).

CEED aims to explore plate motion models in a mantle reference system that also accounts for the accumulation of subducted material in the mantle for the last 550 Myrs, and a general model for the formation of plumes at the LLSVP margins.  We will further explore the evolution, structure and dynamics of the mantle and core and their interaction across the core-mantle boundary.  The origin and evolution of the LLSVPs and the geodynamo are important issues to be addressed.

1.1: Absolute Reference Frames and links to the Deep Mantle

1.2: Plumes from the Margins of the LLSVPs: Toward a Geodynamic Model

1.3: Evolution, Structure and Materials of the Earth's deep interior 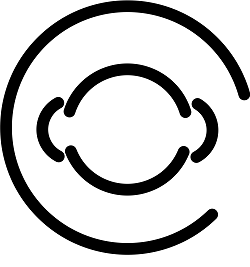