This week we will discuss a paper entitled "Genomic divergence in a ring species complex" by Alcaide and co-authors which was recently published in Nature. 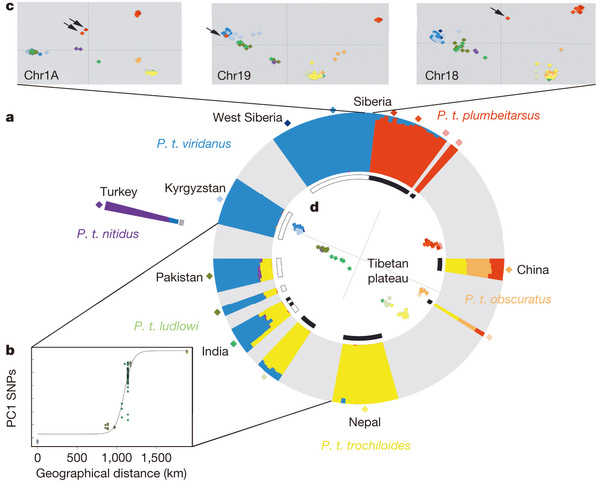 Ring species provide particularly clear demonstrations of how one species can gradually evolve into two, but are rare in nature. In the greenish warbler (Phylloscopus trochiloides) species complex, a ring of populations wraps around Tibet. Two reproductively isolated forms co-exist in central Siberia, with a gradient of genetic and phenotypic characteristics through the southern chain of populations connecting them. Previous genetic evidence has proven inconclusive, however, regarding whether species divergence took place in the face of continuous gene flow and whether hybridization between the terminal forms of the ring ever occurred. Here we use genome-wide analyses to show that, although spatial patterns of genetic variation are currently mostly as expected of a ring species, historical breaks in gene flow have existed at more than one location around the ring, and the two Siberian forms have occasionally interbred. Substantial periods of geographical isolation occurred not only in the north but also in the western Himalayas, where there is now an extensive hybrid zone between genetically divergent forms. Limited asymmetric introgression has occurred directly between the Siberian forms, although it has not caused a blending of those forms, suggesting selection against introgressed genes in the novel genetic background. Levels of reproductive isolation and genetic introgression are consistent with levels of phenotypic divergence around the ring, with phenotypic similarity and extensive interbreeding across the southwestern contact zone and strong phenotypic divergence and nearly complete reproductive isolation across the northern contact zone. These results cast doubt on the hypothesis that the greenish warbler should be viewed as a rare example of speciation by distance, but demonstrate that the greenish warbler displays a continuum from slightly divergent neighbouring populations to almost fully reproductively isolated species.