This week we’ll discuss a paper by vonHoldt and collaborators in Genome Research from 2011 and a short, but interesting follow up by Rutledge et.al, published in 2015 in Biology Letters. 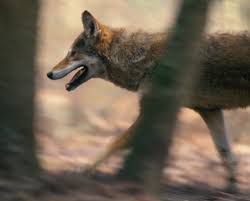 High-throughput genotyping technologies developed for model species can potentially increase the resolution of demographic history and ancestry in wild relatives. We use a SNP genotyping microarray developed for the domestic dog to assay variation in over 48K loci in wolf-like species worldwide. Despite the high mobility of these large carnivores, we find distinct hierarchical population units within gray wolves and coyotes that correspond with geographic and ecologic differences among populations. Further, we test controversial theories about the ancestry of the Great Lakes wolf and red wolf using an analysis of haplotype blocks across all 38 canid autosomes. We find that these enigmatic canids are highly admixed varieties derived from gray wolves and coyotes, respectively. This divergent genomic history suggests that they do not have a shared recent ancestry as proposed by previous researchers. Interspecific hybridization, as well as the process of evolutionary divergence, may be responsible for the observed phenotypic distinction of both forms. Such admixture complicates decisions regarding endangered species restoration and protection.

Top predators are disappearing worldwide, significantly changing ecosystems that depend on top-down regulation. Conflict with humans remains the primary roadblock for large carnivore conservation, but for the eastern wolf (Canis lycaon), disagreement over its evolutionary origins presents a significant barrier to conservation in Canada and has impeded protection for grey wolves (Canis lupus) in the USA. Here, we use 127 235 single-nucleotide polymorphisms (SNPs) identified from restriction-site associated DNA sequencing (RAD-seq) of wolves and coyotes, in combination with genomic simulations, to test hypotheses of hybrid origins of Canis types in eastern North America. A principal components analysis revealed no evidence to support eastern wolves, or any other Canis type, as the product of grey wolf × western coyote hybridization. In contrast, simulations that included eastern wolves as a distinct taxon clarified the hybrid origins of Great Lakes-boreal wolves and eastern coyotes. Our results support the eastern wolf as a distinct genomic cluster in North America and help resolve hybrid origins of Great Lakes wolves and eastern coyotes. The data provide timely information that will shed new light on the debate over wolf conservation in eastern North America.
E-mail this page
UiO > The Faculty of Mathematics and Natural Sciences >
CEES - Centre for Ecological and Evolutionary Synthesis > Research >