We feel that it's time to find out about the Pairwise Sequential Markovian Coalescent and it derivations. How does it magically infer demography from single genomes? Why does the original author recommend other tools? Why do all these demography plots look the same? And can I use it for my data? Once more, we'll need more than one paper to find out. We'll focus on the first publication to present the PSMC, Li & Durbin (2011) in Nature, but we invite participants with a bit of extra time to check out and report on updates on the method, which were published by Schiffels & Durbin (2014) in Nature Genetics, and by Harris et al. (2014) on arXiv. 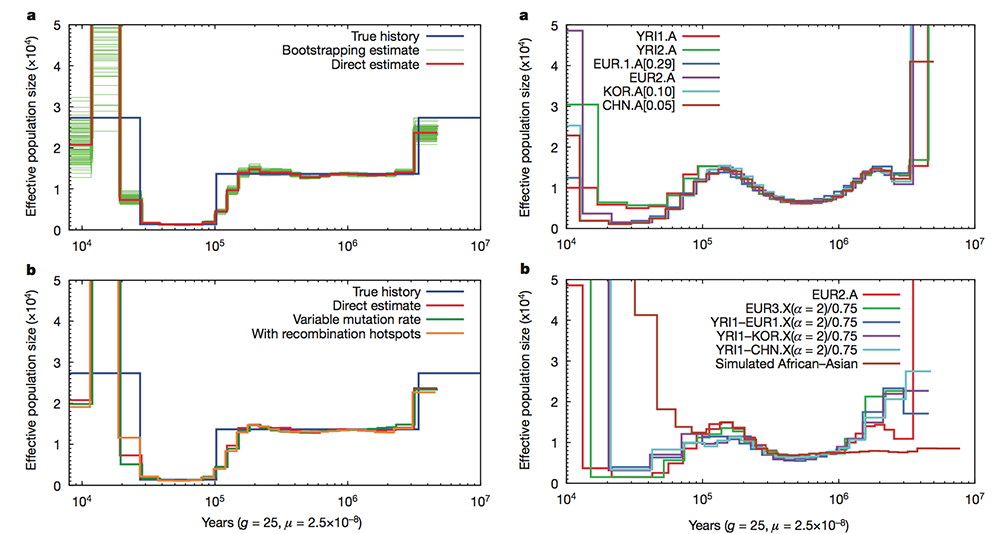 Abstract: The history of human population size is important for understanding human evolution. Various studies have found evidence for a founder event (bottleneck) in East Asian and European populations, associated with the human dispersal out-of-Africa event around 60 thousand years (kyr) ago. However, these studies have had to assume simplified demographic models with few parameters, and they do not provide a precise date for the start and stop times of the bottleneck. Here, with fewer assumptions on population size changes, we present a more detailed history of human population sizes between approximately ten thousand and a million years ago, using the pairwise sequentially Markovian coalescent model applied to the complete diploid genome sequences of a Chinese male (YH), a Korean male (SJK), three European individuals (J. C. Venter, NA12891 and NA12878) and two Yoruba males (NA18507 and NA19239). We infer that European and Chinese populations had very similar population-size histories before 10–20 kyr ago. Both populations experienced a severe bottleneck 10–60 kyr ago, whereas African populations experienced a milder bottleneck from which they recovered earlier. All three populations have an elevated effective population size between 60 and 250 kyr ago, possibly due to population substructure. We also infer that the differentiation of genetically modern humans may have started as early as 100–120 kyr ago, but considerable genetic exchanges may still have occurred until 20–40 kyr ago.