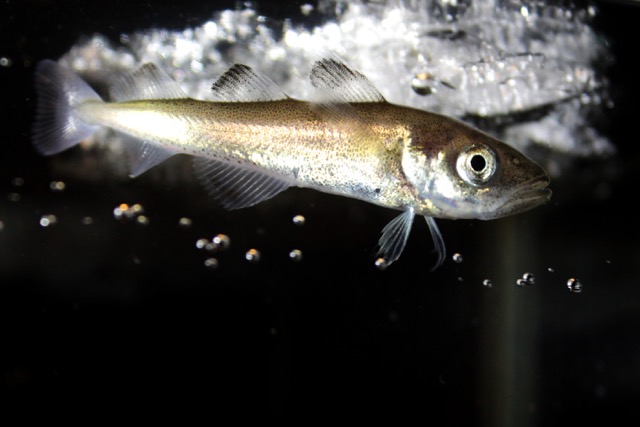 Genomes recurrently acquire new genes, often to take on novel functions in response to a changing selection regime. One notable driver of evolutionary innovation is the onset of freezing temperatures, which have spurred the evolution of the antifreeze proteins (AFPs) in bacteria, plants, fungi, insects, and teleost fish. Notably, the antifreeze glycoproteins (AFGPs) in codfishes are encoded by genes (afgps) that are orphans, i.e. not homologous to any other gene. Highly similar afgps evolved independently in Notothenioids from mainly non-coding intronic sequence in the trypsinogen-like protease (TLP) gene. In both lineages afgps are highly repetitive genes, complicating studies of their structure, organization and evolutionary origin. By taking advantage of full-genome sequencing of several codfishes and Notothenioids we demonstrate that afgps in codfishes have evolved from non-coding DNA, coinciding with the cooling of the northern hemisphere 14 MYA ago. De novo gene evolution is becoming more widely recognized as a regular source of new genes, which often encode novel functions representing lineage specific adaptations to the environment. Furthermore, in both codfishes and Notothenioids there is an afgp gene dosage effect related to environmental harshness. At one extreme, AFGP function is lost in one lineage of codfishes analogous to the AFGP losses in non-Antarctic notothenioids. This indicates that selection effectively eliminate this protein when freezing is no longer imminent. Additionally, we show that evolution of AFGP-assisting antifreeze potentiating proteins (AFPPs) in notothenioids coincide with origin and lineage-specific losses of AFGP. By demonstrating the de novo origin of afgps in codfishes, the co-evolution of AFPPs and AFGPs in Notothenioids, and that the dynamic expansions and losses of these genes in the two distantly related clades are strongly affected by past climate changes, we here shed new light on the evolutionary processes of antifreeze function.