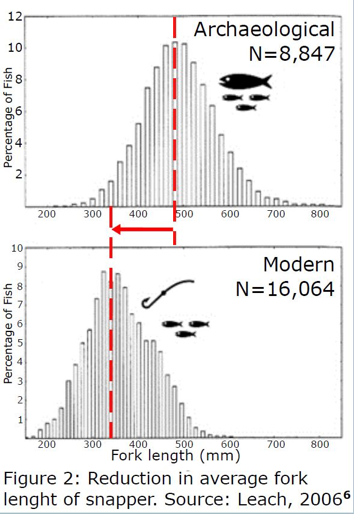 Size-selective fishing is hypothesized to be a potent selective force, possibly driving evolution. In theory, a preference for larger individuals creates a selective advantage for smaller individuals that reach maturity at younger ages. Reductions in average fish size and age at maturation have already been observed in various commercially fished species. However, such phenotypic changes can be mediated by either phenotypic plasticity or genetic adaptation, and the distinction between the two processes is of crucial importance. Phenotypic changes through genetic adaptation are irreversible and will be present long after the selective pressure has disappeared. So far, evidence for size-selective fishing induced evolution (genetic adaptation) has only been inferred indirectly using phenotype methods and laboratory experiments. This study utilizes ancient-DNA combined with whole genome sequencing to generate compatible temporally structured genomic datasets. This approach allows us to infer directly whether size-selective fishing is facilitating evolutionary changes, and identify associated genes. New Zealand snapper is a prime candidate as it has been subjected to long-term exploitation, and has experienced reductions in average fish size and age at maturation. Well preserved archaeological records allow for the extraction of ancient DNA, and test for genetic adaptation between a virtually pristine population and the heavily exploited contemporary population. Fish stocks are being exploited worldwide, and likely experience similar selective pressures due to size-selective fishing. Information regarding the molecular mechanisms that drive this potential evolutionary force will enable us to address a major question about the extent of humans as a dominant force of environmental change.