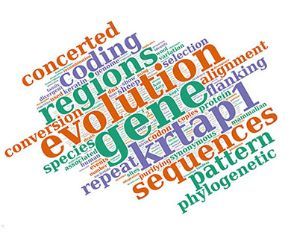 Mammalian genomes contain a number of duplicated genes, and sequence identity between these duplicates can be maintained by purifying selection. However, between-duplicate recombination can also maintain sequence identity between copies, resulting in a pattern known as concerted evolution where within-genome repeats are more similar to each other than to orthologous repeats in related species. We investigated the tandemly-repeated keratin-associated protein 1 (KAP1) gene family, KRTAP1, which encodes proteins that are important components of hair and wool in mammals. Comparison of mammal KRTAP1 gene repeats within and between species shows a strong pattern of concerted evolution. However, in striking contrast to the coding regions of these genes, we find that the flanking regions have a divergent pattern of evolution. This contrast in evolutionary pattern transitions near the start and stop codons of the KRTAP1 genes. We will discuss possible mechanisms behind the contrasting patterns of coding and flanking regions in the KRTAP1 genes.