Hybridization: Causes and consequences for speciation

We are happy to announce that on Thursday 14th December, we will be hosting a symposium on Hybridization: causes and consequences for speciation at the Department for Biosciences, University of Oslo. The symposium will be held in Bikuben on the first floor of Kristine Bonnevies Hus. UiO Blindern Campus. Two prominent young researchers in the field, Joana Meier (University of Bern, Switzerland) & Mario Vallejo-Marin (University of Stirling, UK) are featured as invited speakers. 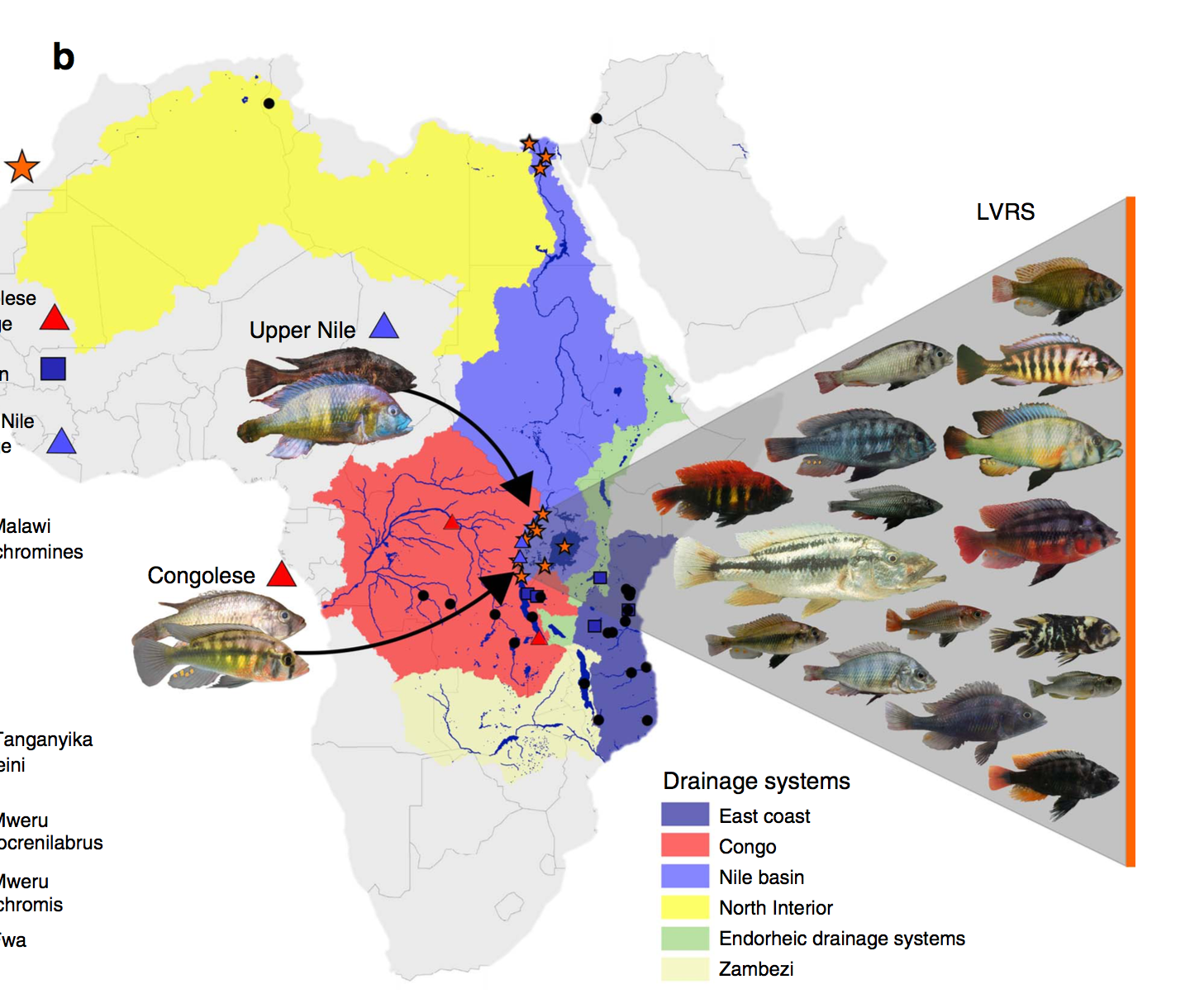 Hybridization is increasingly well-recognised as an important evolutionary processes that has a wide range of consequences including species reversal, reinforcement and hybrid speciation. Genomic data has even revealed that hybrdization has played a role in our own evolutionary history with archaic gene flow from both Neanderthals & Denisovans. Understanding the causes and consequences of hybridization for speciation is therefore an important focus for evolutionary biologists.

With this in mind, our symposium will bring together researchers working on hybridization in plants and animals. Our aim is to generate exciting discussion about the genomic and genetic mechanisms playing a role in hybridization and also to share knowledge and experience with the methods used to detect it. The symposium will feature two prominent young researchers in the field, Joana Meier (University of Bern, Switzerland) & Mario Vallejo-Marin (University of Stirling, UK).

In addition to our invited speakers, there will be short presentations from University of Oslo researchers working on the genomics and biology of hybridization as well as a discussion session at the end of the day.

The program starts 9 am and will finish around 5 pm on Thursday 14th December. Attendance is free and open to all but we ask that you register if you intend to participate for the entire day. Registrate before Monday 11th December.

Looking forward to seeing many of you at the symposium!

Fabrice Eroukhamnoff (CEES, University of Oslo) - Hybridization and speciation: State of the Union

Hybridization is increasingly well-recognized as an important evolutionary processes that has a wide range of consequences including species reversal, reinforcement and hybrid speciation. Understanding the causes and consequences of hybridization for speciation is therefore an important focus for evolutionary biologists. In this introductory talk, I briefly examine the statement made in 2013 by Abbot et al. in their target review: “However, it is striking that, after so much study, we are still poorly equipped to tackle a fundamental problem such as how to estimate the proportion of hybridization events that have led to speciation, and we cannot yet predict whether a hybridization event will be favourable to speciation or not.” in light of the work published since then.

How do hybrid species evolve in the long-term? During the process of hybrid speciation, new re-arrangements in the hybrid can boost genomic variation that may facilitate local adaptation of species of hybrid origin, enhancing population divergence. However, genomic constraints linked to DMIs could still be limiting the evolvability of the hybrid (responses to selection/adaptation).  Using RAD-seq in the hybrid Italian sparrow, we show that, even without clear genome-wide population structure there is support for on-going population divergence. We also report some evidence for recent population expansion and/or purging, which suggests incompatibilities may still have a significant impact on the evolutionary fate of this hybrid species.

How do we determine whether hybridization has driven speciation? Hybrid speciation is regularly invoked but often with insufficient evidence. Presenting an overview of our recent work on the Italian sparrow, I will demonstrate how whole genome resequencing supports the claim that this species has arisen from hybridization between house and Spanish sparrows. Intriguingly, data from multiple Mediterranean island Italian sparrow also suggests that the species may have arisen from hybrid origin multiple times, independently.

It is becoming clear that speciation is rarely a linear process where one species splits into two or more without reticulation. On the contrary, more and more examples of the importance of hybridization in speciation processes are being published. I will present a case of speciation reversal in common ravens, a species which harbours two deeply divergent, paraphyletic lineages apparently in the process of collapsing into one.

In the African Lake Victoria region, 700 cichlid fish species evolved in only 150,000 years through adaptive radiation in multiple lakes. We found that they all originate from a hybrid swarm between two divergent cichlid lineages. This hybridization event facilitated the rapid diversification by providing functional genetic polymorphisms that were subsequently recombined and sorted into many new species. The modern Lake Victoria is only 15,000y old, but harbours 500 endemic cichlid species. With over 400 resequenced genomes, we show that they likely evolved in the lake itself and that hybridization again played an important role in this recent adaptive radiation.

Though the role of sperm morphology in speciation is not well understood, it is suggested that divergence in sperm traits between allopatric populations can lead to compromised ejaculate-female interactions upon secondary contact and, ultimately, post-mating, pre-zygotic reproductive barriers between taxa. Studying two subspecies of long-tailed finch, which differ in sperm size, we find fewer sperm penetrate the egg membrane and reach the site of fertilization when a female copulates with a male from the ‘wrong’ subspecies and when hybrid individuals are backcrossed to a parental subspecies. We discuss these findings in the context of conspecific sperm precedence and reproductive isolation.

We will introduce a new project funded by the Research Council of Norway where we study the molecular mechanisms of post-zygotic barriers in plants, especially the genes and epigenetics involved in the processes that prevent normal embryo development when germ cells from two species merge. We will first of all talk about the work that we have done so far showing that endosperm defects are responsible for the hybridization barrier between two diploid species (Arabidopsis lyrata and A. arenosa) and how polyploidy plays a role in breaking down the barrier and explains the pattern of gene flow between wild populations.

After having described the phenotype of the endosperm-based post-zygotic hybridization barrier between A. arenosa and A. lyrata, we are still left with important questions. Which genes are actually responsible for the described seed barrier? What other factors, in addition to ploidy, could be involved in the bypass of the barrier when crossing diploid A. arenosa and tetraploid A. lyrata? I will in my talk show preliminary results from gene expression analysis using RNAseq data from seed tissue to address the first question, and touch upon the possible effect of introgression and geographical distance when it comes to the second question.

Global change, including human-aided transport of animal and plant species around the world, is providing new opportunities for hybridisation at an unprecedented spatial scale. However, the consequences of secondary contact of previously isolated lineages for the ecology and evolution of natural populations is not well understood. In this talk, I will present a case study of the consequences of hybridisation in introduced populations of monkeyflowers in Europe using two approaches. First, I will discuss whether intra-specific hybridisation between genetically differentiated native an introduced populations facilitates or hinders performance in new environments. Second, I will illustrate the potential of hybridisation to rapidly generate new plant species using as an example the Scottish monkeyflower, Mimulus peregrinus. My talk will emphasize how hybridisation can be a creative evolutionary force even at relatively short timescales.

Our group addresses plant speciation and hybridization at various time scales, ranging from experimental and genomic approaches to understand the widespread  ongoing evolution of hybrid sterility in arctic diploids (cf Nowak’s talk) to hybridization and hybrid speciation events inferred from phylogenetic/biogeographic analyses. In our early work we demonstrated multiple origins of polyploid as well as homoploid hybrid species. Our phylogeographic studies have revealed numerous examples of secondary contact and admixture between lineages expanding after the last glaciation. In recent work on afro-alpine plants, we identified a new polyploid hybrid species with a double hybrid background spanning millions of years.

Mike Novak (NHM, University of Oslo) - Exploring the factors that contribute to hybrid incompatibilities in Arctic and Mediterranean Brassicaceae

The process of speciation can be modeled as the accumulation of hybrid incompatibilities between two lineages ultimately resulting in complete reproductive isolation and thus the establishment of independent evolutionary trajectories. Our project aims to address two important issues related to the process of speciation in plants: 1) Do generally applicable patterns exist in the genetic architecture of hybrid incompatibilities in recently diverged lineages? 2) Does mating system impact the rate at which hybrid incompatibilities evolve between allopatric populations? We address these questions using a series of experiments in Arctic and Mediterranean species in the mustard family (Brassicaceae).

Ongoing studies of the mixed-mating neotropical vine Dalechampia scandens L. (Euphorbiaceae) has revealed that rather than a single species, D. scandens is a complex of phenotypically similar but genetically distinct species, including (apparently) diploid and tetraploid species. Near the type locality in the lesser Antilles, at least three distinct varieties occur. Current questions are whether these are distinct biological species or rather ecotypes maintained in the absence of gene flow, and the role of hybridization in their divergence. I will present preliminary analyses of morphological, microsatellite, nrDNA, and experimental crossing data.

The event is funded by CEES, the Department of Biosciences and EVOGENE