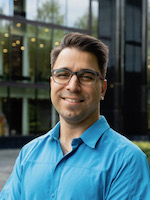 Tiago Pereira’s research interfaces advanced simulations of magnetised plasma, multi-dimensional radiative transfer, and complex spectral imaging observations of the solar atmosphere. The goal is to understand more about stars and the Sun from the radiation that reaches our telescopes. The formation of spectral lines is a highly-dimensional problem that requires tremendous computational power. Dr Pereira is also interested in advanced algorithms to efficiently compute radiative transfer from simulations, and in the visualisation of very large datasets.

Tiago Pereira got his PhD from the Australian National University (ANU) in 2009, specialising in 3D radiative transfer and the formation of spectral lines in solar simulations.

In 2010 he moved to the USA where he took up a NASA postdoctoral fellowship, working at Lockheed Martin Solar and Astrophysics Lab and at NASA Ames Research Center. There, he was part of the early science team for NASA’s upcoming IRIS mission. He studied the formation of spectral lines ahead of the launch of IRIS, to guide future observations.

In addition, he also studied the dynamics of the solar atmosphere combining different space and ground-based observatories. In 2013 he moved to UiO as a postdoc, working closer with the team at the Institute working on the advanced solar simulations. After postdoc and researcher periods at UiO, he became Associate Professor in 2019 and is currently developing a research group.