LaMDa has for a number of years been participating in genome sequencing and comparison of genomes of the organisms in the Bacillus cereus group, which among others include the food pathogen B. cereus, B. anthracis,  the cause of anthrax, and B. thuringiensis, the world's most frequently used biological pesticide. The MDR project has identified 77 conserved possible multidrug transporter proteins in these bacteria, which are characterized with regards to function and structure. 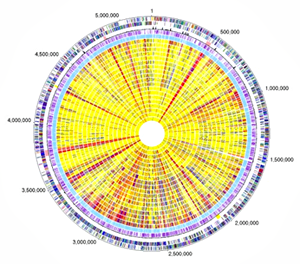 Bacillus cereus is a Gram−positive endospore−forming rod−shaped bacterium that is a major cause of food−borne infections due to its production of an emetic toxin or one or more enterotoxins. In addition it is an opportunistic pathogen particularly associated with nosocomial and serious eye infections. It is closely related to the highly pathogenic B. anthracis, the etiological agent of anthrax in mammals including man (16S rRNA sequences are for some strains identical), and to the insecticidal biocontrol agent B. thuringiensis. The toxin genes conferring the species−specific pathogenicity profiles of B. thuringiensis and B. anthracis are largely plasmid borne. The three species thus share a common chromosomal genetic background. In our research group we have for the last decade been studying the genetic relationship between these closely related bacteria, as well as different factors involved in pathogenicity.

A. Biofilm formation (Principal investigator: Professor Ole Andreas Økstad). The formation of biofilms, in which bacterial cells are embedded in a complex multicellular matrix, has important implications for drug resistance, pathogenicity, and ecology of microbial communities. The aim of this project is to identify and analyze genes involved in biofilm formation in the B. cereus group, and to dissecrt how biofilm formation is regulated. This includes in silico comparative sequence analysis, creation of gene knockouts, microarray expression analysis, and screening for biofilm formation.

B. Comparative genomics. Main efforts include:

C. Phylogenetics and Typing. A robust multilocus sequence typing (MLST) scheme (based on partial sequencing of 7 housekeeping chromosomal genes) has been developed for B. cereus group bacteria, and has been used to map more than 180 strains, to increase our understanding of the phylogeny and population structure of the B. cereus group of organisms (collaborations with The Norwegian Institute for Public Health and Institute of Oral Biology, University of Oslo, and Institut Pasteur, France). An MLST website has been set up locally at the University of Oslo including three databases: (1) a database devoted to our MLST scheme, (2) an integrative supertree database combining data from four other published MLST schemes totalling ~1400 B. cereus group isolates, as well as (3) a supertree database combining MLST data with data from two other typing methods, MultiLocus Enzyme Electrophoresis (MLEE) and Amplified Fragment Length Polymorphism (AFLP), totalling >2000 B. cereus group isolates.

D. Transcriptome analysis. The group has established microarray technology for gene expression studies in B. cereus group organisms, and has been performing studies of virulence factor expression. Analyses of resistance to bile salts have also been conducted. Furthermore, in vitro infection studies were conducted using the human CaCo−2 intestinal cell line, in order to study gene expression in the bacteria and host during infection.

Background for the project

B. cereus and B. thuringiensis are common bacteria of the environment, that form spores when the supply of nutrients is limited. The spores are dormant cells in which the genome is well protected against external destructive agents like heat, drying, UV irradiation, and chemicals, and they may remain dormant for very long time periods (decades, possibly longer). For this reason, sporulating bacteria are able to survive conditions that would normally kill other bacteria. When environmental conditions improve, the spores may germinate and initiate vegetative growth.

B. cereus is an opportunistic pathogen capable of causing several types of infections in man. Many strains produce enterotoxins or an emetic toxin that may cause gastroenteritis, diarrhoea, and vomiting, and in Norway B. cereus is currently the prime cause of bacterial food poisoning. B. cereus is also a frequent polluter organism in dairies (and thus in milk products), due to toxin synthesis, as well as formation of heat−resistant spores which survive pasteurization. It is also an opportunistic contaminant in hospitals and is involved in several types of nosocomial infections. Furthermore, B. cereus is considered one of the most severe organisms to affect the eye (most often after trauma), in a number of cases resulting in blindness in the affected individual.

The only main feature differentiating B. cereus from B. thuringiensis is that the latter produces intracellular insecticidal protein crystals (δ−endotoxins) during sporulation, which are toxic to insect larvae (Lepidoptera, Coleoptera, and Diptera). For this reason, B. thuringiensis is used commercially as a biopesticide, and mixtures of insecticidal crystals and spores are sprayed in large amounts over crop fields in many parts of the world. The bacterium is also used to combat insects that are vectors for diseases such as malaria or yellow fever. This organism is therefore of high economic potential for the agricultural industry, and more than 200 B. thuringiensis−related products were registered in the United States by 1998. Although B. thuringiensis is not generally regarded as a polluter today, this bacterium appears in many cases to produce the same virulence factors as B. cereus.

B. anthracis has traditionally been identified as a non−haemolytic, non−motile, penicillin−sensitive, encapsulated bacterium causing the lethal disease anthrax. The organism is endemic or hyper−endemic in Africa, Asia, and South America, and anthrax−like infections have been described in ancient literature dating back more than 2000 years. The bacterium has also been considered a potential weapon in biological warfare, and was used as a bioterror agent in the anthrax letter attacks in the US during the fall of 2001. The genes causing the lethal effects of anthrax are located on two large virulence plasmids, pXO1 encoding the three anthrax toxin subunits, and pXO2 encoding the poly−D−glutamate capsule. Similarly, the genes encoding entomopathogenic proteins in B. thuringiensis are most frequently located extrachromosomally on plasmids. The phenotypic traits employed for the identification of B. anthracis and B. thuringiensis may thus be lost, making them indistinguishable from strains of B. cereus. Strains of B. anthracis in which one of the virulence plasmids are lost have been isolated during epidemiological investigations and characterised as B. cereus. Similarly, when B. cereus strains receiving plasmids encoding crystal toxin or capsule formation, they are transformed into Cry+ and Cap+ variants that would be identified as B. thuringiensis and B. anthracis, respectively.

Our research group has for the last two decades been studying the genetic relationship between the B. cereus group bacteria, as well as different factors involved in pathogenicity. Major achievements include:

Comparative genomic and functional analysis of the transcriptional regulator PlcR reveals a global regulon of extracellular virulence factors in B. cereus and B. thuringiensis, while the highly toxic human and animal pathogen B. anthracis has acquired a mutation in the PlcR regulator, abolishing its function (collaboration with Institut Pasteur, France) (Mol. Microbiol. 32: 1043-53: 1999, Microbiology 145: 3129-38: 1999, Microbiology 145: 3139-46, Proteomics 2: 784-91, 2002).

Discovery of a novel, B. cereus group-specific, DNA repeat element bcr1, further characterized as a possible mobile genetic element creating a target-site duplication upon insertion (Microbiology 145: 621-631: 1999, J. Bacteriol. 186: 7714-25: 2004).
Collaborative partner with The Institute for Genomic Research (TIGR), USA, in the sequencing and comparative genome analysis of the first complete genome of a B. cereus group strain, B. anthracis Ames (Nature 423: 81-86: 2003), and the genome of B. cereus ATCC 10987 containing a large plasmid similar to the B. anthracis virulence plasmid pXO1 (Nucl. Acids Res. 32: 977-988: 2004).
Design and application of the first MultiLocus Sequence Typing (MLST) scheme for phylogenetic analysis of B. cereus group bacteria (Appl. Environ. Microbiol. 70: 191-201: 2004), leading to the identification of several clonal lineages comprising strains isolated from clinical sources. The first report of a substance with antimicrobial activity from the B. cereus type strain, ATCC 14579, which has an inhibitory effect on several clinically relevant species (J. Appl. Microbiol. 96: 648-55: 2004).

Establishment and application of DNA microarray technology, for analyzing expression patterns of virulence genes in wild-type and mutant B. cereus group strains under normal growth conditions, and during in vitro infection assays using human cell cultures (in preparation).

Furthermore, published 20 additional papers on the basic biology of B. cereus, B. thuringiensis, and B. anthracis in various microbiology and molecular biology journals during the period 1990-2006.