Francisella tularensis causes the zoonotic disease tularemia (harepest in Norwegian). Other Francisella species cause disease in both animals and humans. Our research group is interested in understanding the impact of genome dynamics on the specific host−pathogen interaction of Francisella species where we use bacteria from the F. philomiragia group as a model system. 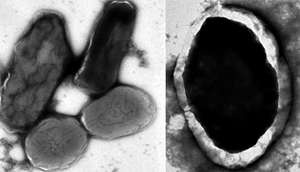 F. tularensis causes the zoonotic disease tularemia (harepest in Norwegian) and natural infections have been reported in a range of vertebrates and invertebrates. Due to its capacity to cause severe illness and death, and its low infectious dose, F. tularensis is considered a Category A agent of bioterrorism. The Francisella philomiragia group consists of three species, i.e. F. philomiragia, F. noatunensis and F. asiatica. The two latter species has only been isolated from diseased fish while F. philomiragia have been identified as a pathogen in both animals and humans.

Our research group is interested in understanding the impact of genome dynamics on the specific host−pathogen interaction of Francisella species where we use bacteria from the F. philomiragia group as a model system. As a whole, little is known about the molecular basis of the putative virulence of the F. philomiragia group. New opportunities, however, are arising from sequencing several genomes of F. noatunensis and F. asiatica together with the already completed genome of F. philomiragia. This is a great asset for the identification of potential virulence factors and will give new insight to the species specificity.

Francisella infection in fish was first described in 1970 and is today known as francisellosis. Epidemics have been found in both farmed and wild-fish from fresh, brackish and marine waters and include Atlantic cod, several tilapias, bass and Atlantic salmon. Francisellosis is particularly a problem in the aquaculture industry with the domestication of Atlantic cod and thus of substantial economical consequences in the Norwegian fish farm industry.

Although Francisella has been recognized as a major agent for disease in fish, both in aquaculture and in wild stock and was recognized more than 20 years ago, the pathogenesis of this disease is far from understood. Even due to major efforts, development of an efficient vaccine against fish francisellosis has not been successful. Thus, a through investigation of F. philomiragia pathogenesis and development of a vaccine is essential.

A: Exploration of virulence factors in the F. philomiragia group with particular emphasis Type IV pilin like genes

In general, the adherence of microbes to any host tissue represents the initial step in the pathogenesis of infections. The successful colonization of surfaces by bacteria is often mediated by cell-surface organelles such as pili and flagella. Pili are protein based hair like appendage and their expression are associated with a range of phenotypes in bacteria such as genetic exchange, locomotion, susceptibility to bacteriophages, biofilm formation and the adherence of a bacterium to a host cell during infection.

Francisella species encodes several genes required for the functional expression of Type IV pili (T4P) genomes. A number of findings suggest that genes involved in T4P-associated biology impact on virulence in the F. tularensis group. A feasible hypothesis is thus that the surface expression of T4P has an important impact on pathogenesis of F. philomiragia as well and is currently under investigation in our group.

B: Function of the Francisella pathogenicity island in the cod pathogen Francisella noatunenesis.

In this part of the project we study the implication that the Francisella pathogenicity island (FPI) has on development of the disease francisellosis in cod. The FPI consist of 16 -19 genes that had been identified in all Francisella genomes sequences so far. The genes are relatively conserved and have important pathogenic implications such as growth and replication within the host (for review see Nano & Schmerk, 2007). Four genes are particularly important for growth within the host cells; these are iglA, B, C and D (igl = intracellular growth locus). IglC in particular is essential for growth within the immune cells in mice, humans and fish (Barker & Klose, 2007, Soto et al. 2009).  An iglC mutant of F. orientalis has been promoted as a vaccine candidate in tilapia. In this part of the project we wish to study the effect and implication of IglC in the cod pathogen F. noatunensis.