Viruses are mobile genetic elements with both intracellular and extracellular forms, totally dependent on a host cell for their replication. During acute viral infections there is an ongoing battle between host immunity and viral replication. In our lab we investigate the transcriptional and biochemical changes occurring in cells from Atlantic salmon infected with viruses like ISAV and IPNV. 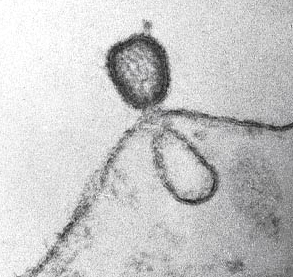 Viruses are mobile genetic elements with both intracellular and extracellular forms, totally dependent on a host cell for their replication. Many viral infections are chronic and can be regarded as a part of the host metagenome where viral and host genes balance each other.  In contrast, during acute infections there is an ongoing battle between host immunity and viral replication resulting in viral clearance or death of the host. Both prokaryotic and eukaryotic cells have developed molecular machinery for viral detection and clearance (Nakhaei et al., 2009; Sarkar et al., 2008; Takeuchi and Akira, 2008; Thompson and Locarnini, 2007).

Today, fish and shellfish aquaculture produce about 50% of total seafood for human consumption. Bacterial and viral infections constitute a constant stress to animal welfare and economics of the industry. Several bacterial diseases have been reduced to a minimum due to efficient vaccination programs, but many viral diseases still pose a great problem. To develop better profylaxis (vaccines) for these diseases we need a better understanding of the pathogen – host interactions for marine viruses like ISAV, IPNV, PDV and others (Evensen et al., 2005).

In our lab we investigate the transcriptional and biochemical changes occurring in cells from Atlantic salmon infected with viruses like ISAV and IPNV. Using microarrays, QPCR and other techniques we try to understand how cells contain viral replication (innate immunity) and the mechanisms used by the viruses to circumvent this cellular defense apparatus. The immune system of teleost fish consist of both an innate and adaptive response like in mammals, but the specificity and affinity of antibodies produced after infection or immunization are lower. Efficient cytotoxic T-cell responses (CTL) have also been hard to demonstrate. To combat viral infections, fish therefore seems to rely more on the germline-encoded pattern recognition receptors (PPRs) like TLR, RIG-I and Mda5 to detect virus and induce antiviral responses (Workenhe et al., 2010). These responses include secretion of alarm molecules like interferons and interleukins (Robertsen, 2006; Robertsen et al., 2003) (putting neighbouring cells in an antiviral state), and synthesis of effector molecules like Mx, ISG15 and PKR to restrict the replication of the intracellular viral pathogen (Haller et al., 2007) (see figure below) .

Using tools of functional genomics we have identified many transcripts induced during in vitro infection with infectious salmon anemia virus (Schiotz et al., 2008). We have used these data to study the transcriptional changes in greater detail during the  infectious process in vitro (Jorgensen et al., 2007; Jorgensen et al., 2006a; Jorgensen et al., 2006b), whereas others have followed up these studies in vivo (Jorgensen et al., 2008). When animals are infected with virus, one mechanism of containing the infection is by induction of controlled cell death (apoptosis) in the infected cells. This “sacrifice” is can be seen a protective measure to control infection and many viruses have developed  anti-apoptotic proteins to counter this prosess (Koyama et al., 1998). When salmon cells are infected with ISAV, cell- and strain-dependent apoptotic changes take place and we are currently investigating the role of this process in immune responses to ISAV  (Schiotz et al., 2009). ISAV also induce autophgagy in salmon salmon cells but it is presently unclear if this is a part of the protective response, or used by the virus to increase replication (Schiotz et al., 2010).