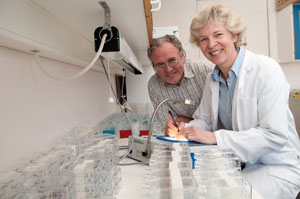 THE BODY'S RADIATION WARNING: Cells that are exposed to low-dose radiation emit a molecular warning. The message is sent to other unirradiated cells in the body, which then can turn on resistance to radiation. Professor Erik Olai Pettersen and Postdoctoral Fellow Nina Jeppesen Edin have now found out how to turn this resistance on and off. The research was done at the cell cultivation laboratory at the University of Oslo. Photo: Yngve Vogt

Although radiation treatment is becoming increasingly important in combating cancer, it can, due to resistance, work poorly for many patients. "We don't know which patients are affected before radiation treatment starts. This is a problem, especially when we give curative cancer treatment," says Anne Hansen Ree, who is both a professor of medicine at the University of Oslo and a chief physician at Akershus University Hospital.

Two biophysicists, Professor Erik Olai Pettersen and Postdoctoral Fellow Nina Jeppesen Edin of the Department of Physics at the University of Oslo, have now discovered how it is possible to turn the body's own resistance to radio- and chemotherapy on and off.

"This is new knowledge that opens possibilities for better treatment. But there is a lot of research work ahead, so we don't dare say which cancers the discovery might help fight," says Pettersen, coordinator of the international cancer research project Metoxia, which has received NOK 100 million in EU support in recent years.

Read the whole article in the research magazine Apollon

More on this research