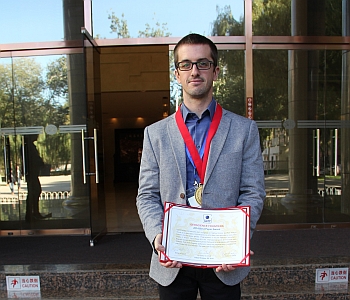 Last month (October 29) Mathew Domeier, a researcher at the Department of Geosciences and The Centre for Earth Evolution and Dynamics (CEED), received the GSF Medal for the 2014 Best Paper published in Geoscience Frontiers for the paper entitled “Plate Tectonics in the Late Paleozoic”

The award ceremony took place in Beijing and Domeier was awarded the prize for “A paper that presents an innovative plate kinematic scenario which serves as a general framework for understanding late Paleozoic tectonics. The work integrates geodynamic theory and analytical tools to construct full-plate models that are of interest to the wider Earth-Science community”.

After the ceremony Domeier gave a lecture on “The Application of Plate Tectonics to the Paleozoic“ in a packed lecture room (picture).