Two professors at the Dept of Geosciences, University of Oslo have recently been appointed to membership and positions within academia. Joseph LaCasce is admitted to The Norwegian Scientific Academy for Polar Research, and Andreas Kääb is appointed to a position in Circle-U – a network for European university collaboration. 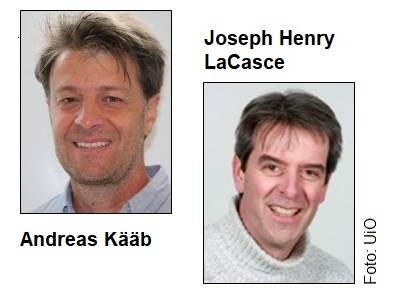 Professor Andreas Max Kääb was in January 2022 appointed to "Academic Chair" in the "Knowledge hub of Climate" in the network Circle-U. This interdisciplinary network brings together nine universities in as many European countries for collaboration on research and education. The network is now led by Rector Svein Stølen at the University of Oslo.

Kääb  is a professor of geomatics at the Department of Geosciences, University of Oslo (UiO) from 2005, employed in the Section for Geography and Hydrology (GeoHyd). His main research interests are monitoring and understanding of cold region processes, such as glaciers, permafrost, and river flow, and the climate change impacts and natural hazards related to them. He has taught geomatics and remote sensing for many years.

Professor Joseph Henry LaCasce, Department of Geosciences, UiO, was admitted as a member of the The Norwegian Scientific Academy for Polar Research (NVP) in December 2021. This academy has 173 individual members in addition to the five institutional members. The academy is based in Longyearbyen, Svalbard, 78 ° north, and aims to promote research and education about and in polar regions.

LaCasce is a professor of oceanography at the Department of Geosciences from 2007, employed in the Section for Meteorology and Oceanography (MetOs). Among his research interests are large-scale dynamics in the atmosphere and the ocean, turbulence and Lagrangian statistics. He has taught oceanography and meteorology for a number of years, and has also been associated with teaching at The University Centre in Svalbard – UNIS, Norway.

About The Norwegian Scientific Academy for Polar Research, see: www.polar-academy.com

Colleagues at the Department of Geosciences send their congratulations!