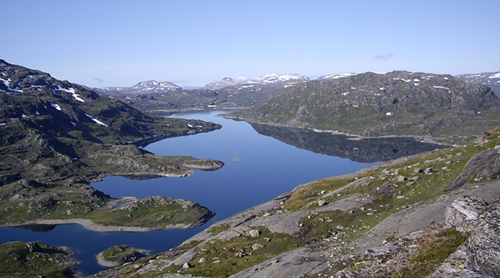 The major perspective of the TIMS U-Pb Isotope Geology Laboratory is on the general theme of ‘orogeny through time’.

As the lab is located at the edge of the foreland of the Caledonian orogen a significant portion of its activity is, naturally, directed towards the elucidation of the processes and dynamics that led to the evolution of the Caledonides. Specific programs have been, and are being carried out on the nappes of central Norway, specifically the Jotun, Dalsfjord and Hardangervidda-Ryfylkke nappe systems, in the Finnmarkian Caledonides, in the Upper Allochthon of the Trondheim region, and on eclogites of the Seve Nappe, the Tromsø Nappe and the caledonized basement of the Western Gneiss Region. Also included in the research are segments of the Caledonides in Svalbard and East Greenland. Major issues are the dynamics of the collisional processes, the nature of the nappes and their tectonic provenance.

The lab is also, physically, within walking distance of the Precambrian basement of the Baltic (Fennoscandian) Shield, which is, thus, another natural subject of our research. Important projects have been, or are being carried out on the magmatic and metamorphic evolution of the Lofoten-Vesterålen archipelago, and its northern continuation on the outer islands of Troms, the Western Troms Basement Complex, in the Bamble and Telemark region of southern Norway, and in basement units of central Sweden.

The third geological Province underlying the lab is the Permocarboniferous Oslo Graben and some activities have been dedicated to this unique suite of rocks. One specific project involved dating the earliest alkalic basalts of the Brunlanes and Skien suites using perovskite. Other work has been done on constraining the age of key granitic to syenitic intrusions. The development of the Oslo Graben was one of a number of events that accompanied the processes of amalgamation of Laurentia, Eurasia and Gondwana into the ‘pac-man’ shaped Pangea supercontinent. Because of its global significance, the research on the Oslo Graben has therefore also some relations to a number of studies on Paleozoic and Variscan belts in Portugal, Spain and Central Europe carried out in collaboration with researchers from these regions.

Orogeny is a worldwide phenomenon and has been instrumental for the growth of the continental crust since the earliest Precambrian. Inevitably the lab has been, and is involved in studying various facets of this long evolution. This includes Mesozoic and Cenozoic magmatic activity related to subduction of the Pacific Plate in Peru and of the Neotethis Plate in Iran, closure of the Panafrican orogen in Ghana, and other Neoproterozoic orogenic  activity in Eastern Egypt, Malawi, northwestern India and Novaya Zemlya.

A more specific line of work, in collaboration with the group at PGP, deals with the causes, timing, and consequences of major climatic and environmental disruptions in Earth history. Specific themes are related to Large Igneous Provinces: the Paleogene magmatism in and around the North Atlantic, the extensive basaltic magmatism of the Siberian traps at the Permian-Triassic boundary, and the Jurassic magmatism of the Karoo system across South Africa and, for correlation purposes, coeval volcanic activity recorded in bentonites of the Neuquen basin in western Argentina. In a similar spirit, aspects of one of the most fundamental periods of Earth history with severe glaciations and the transitions from anoxic to oxygenated atmosphere are being studied in the Transvaal Province of South Africa. A somewhat related issue is the timing of meteorite impacts, with work being done to evaluate the timing of formation of the Gardnos impact structure.

Another type of work done in the laboratory deals with research on the properties of zircon. We also contribute to the calibration of reference material for use in SIMS and LA-ICPMS work. In order to solidify the basic analytical capability, the lab has been collaborating to some extent with the EARTHTIME initiative.