The three Norwegian impact structures; Gardnos in Hallingdal, Ritland  in Rogaland and Mjølnir in the Barents Sea, has been analysed in detail by our department through many years now in numerous projects. 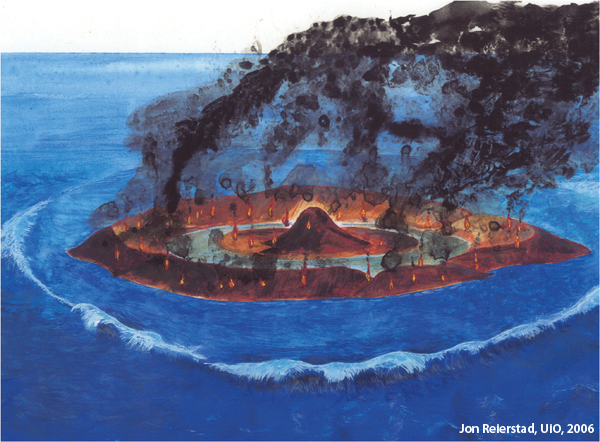 Illustration of the meteorit impact in the Barents sea 142 million year ago. Illustration: Jon Reierstad, UiO, 2006.

The Gardnos and Ritland craters are on land and have been studied by field mapping and laboratory analysis. The Mjølnir structure has been the target of the group for more than 15 years of research and has established the 40-km-diameter Mjølnir crater as one of the best-preserved and most studied marine impact craters on Earth. The easily accessible structure is located in the central Barents Sea at lat 73º 48´N, long 29º 40´E below ice-free waters.

The three impact craters in Norway we are carring out research in:

The following objects have been and will be addressed in the impact crater analysis: 1) geological aspects and mechanisms of the impact cratering process, ejecta formation and transportation, 2) physical/petrophysical aspects of the impact cratering/ejecta formation processes, 3) impact target (water, water-saturated sediments) behaviour during and after impact 4) impact magnitude and potential impact-induced environmental/biological stress, 5) post-impact modifications due to sediment loading and not least 6) the stratigraphical developments across, of particular importance in the Mjølnir case will be the highly discussed Jurassic /Cretaceous transition. In this relation the petroleum geologically consequences of better understanding the source and seal qualities of the Hekkingen Formation should be mentioned.

The number of impact craters in Norway is limited to a small number compared to the other Nordic countries with comparable geology. 6 in Sweden, 11 in Finland and 5 in little Estonia. In the search for new craters in Norway, the public was encouraged to take part by mapping and investigating “circular structures” as potential candidates for undiscovered impact craters. We made maps of circular strucures and distributed them on the web so people could study them in familiar areas and report back to us.