A large international study - Global Land Ice Measurements from Space (GLIMS) shows that Earth’s glaciers are shrinking with only a few exceptions. The scientists behind the study have applied satellite images to study the glaciers over the recent decades. The comprehensive report is now published as a book and an e-book. 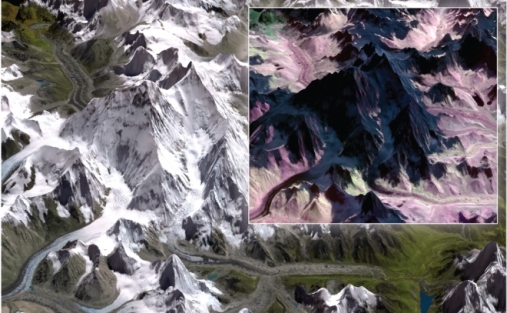 Image of Mount Everest and the Khumbu icefall (left) in a green-red-near infrared ASTER satellite image. Snow and ice appear white, as also humans see it. Inset to the right: Part of the mountain and ice fall as seen with a satellite image that captures infrared light that show snow and ice in dark colours. Figure: A. Kääb.

Global Land Ice Measurements from Space (GLIMS) is a large international research initiative with scientists from around the world participating. Together have the scientists compiled an unprecedented status report that measures Earth’s glaciers over decades.

The new study consists of almost 1000 pages – the typical size of an IPCC report. The report presents an overview and detailed assessment of glacier changes based on satellite images

More than 150 scientists from around the world have contributed to the Global Land Ice Measurements from Space and to the study published now. The work is the most comprehensive report on present-day glacier changes.

That glaciers shrink around the world was known before from ground observation of single glaciers. Using repeat satellite images, the scientists contributing to GLIMS have now confirmed that almost all glaciers on Earth retreat.

Even if some few glaciers are currently stable in size or even slightly growing, scientists find that the far majority of glaciers worldwide is shrinking, with global atmospheric warming beeing the foremost reason. .

The GLIMS study has been coordinated by 4 scientists from USA, Jeff Kargel, Greg Leonard (both from University of Arizona), Bruce Raup (National Snow and Ice Data Center), Michael Bishop (Texas A&M University) and one scientist from Norway, Andreas Max Kääb, Department of Geosciences, University of Oslo.

The study is published as a book and an e-book by Springer: