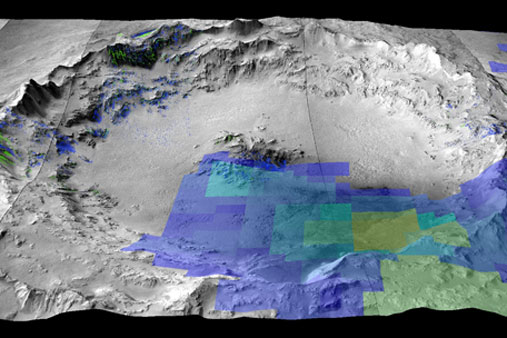 3D image of Mojave crater on Mars where shergottite meteorites originated. Tinted areas show the presence of the minerals pyroxene and olivine which are the main constituents of shergottites. Photo: Data from OMEGA (MEX / ESA, crismar and CTX (MRO / NASA), (A.Ody)

Meteorites from Mars has been known since the 1980s. The largest group of Martian meteorites are called shergottites.

Researcher Stephanie Werner and her team at CEED have now been able to identify the source crater of these shergottites.

The source area on Mars was probably struck around 3 million years ago by a stony body with a diameter of 5.5 km. Rock fragments which were torn from Mars at that time ended their flight through space when they landed on the Earth’s surface a few thousand years ago, she says.

Wernes and her team’s findings are discussed in the prestigious international science magazine Science / Science Express. In addition to Werner, researchers Anouck Ody and Francois Poulet are co-authors of the article.

Meteorites are fragments of larger objects - such as asteroids, other planets or the moon. They have survived a journey through space and through the Earth's atmosphere. They may be rock fragments, or may consist of iron-nickel alloy or a mixture of iron and rock .

Because the source crater is Mojave (7.7 N, 33.0 W), the mineralogy and age of the meteorites be placed in a Martian geological context.

A lengthy debate is thus concluded. We can confirm that the shergottites are more than 4.1 billion years old, says Werner.
The geological evolution of other planets isdifficult to study since fieldwork is not possible there.

But meteorites that originated from other planets and have fallen down to Earth, can be analysed in the laboratory and give us unique information. We can determine the age and mineralogy. Other detailed laboratory analysis tells us about planetary volcanic and petrological development. These analyses can not provide information about the location or crater where meteorites originated on the parent planet, says Werner.

The density of cratering is crucial

But based on dated lunar samples, which were brought back to Earth during the Apollo program, one can create a model in which the crater frequency can be related to absolute ages, she says.

A shergottite fragment called "Zagami" can be studied in the meteorite collection at the Natural History Museum (NHM) in Oslo, while the total collection consists of about 250 fragments.

Most meteorites are much older than the Martian meteorites, i.e. closer to 4.56 billion years, and provide important information about the formation of the solar system, says Werner.

There are 15 known meteorite falls in Norway, and most of these meteorites are housed at the Natural History Museum.

And several articles in international media.