Guess what happens when you introduce a composer to a geologist

The award-winning composer Natasha Barrett has long been fascinated by the sounds of nature. In 2009, Barrett contacted PGP (centre for Physics of Geological Processes) at the University of Oslo where she was introduced to geologist Karen Mair. Mair quickly became interested in the project. 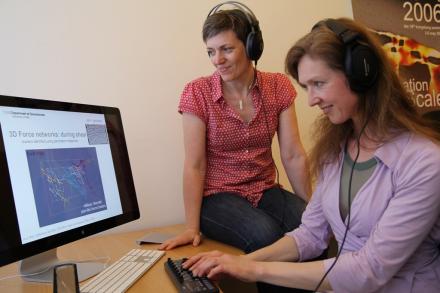 Karen Mair (left) and Natasha Barrett listen to the sounds as they study a computer model that explains a little about what happens inside a stone crusher. By using a keyboard or another controller you can regulate the strength of the various sounds and thereby create your artistic expression. (Photo: Gunhild M. Haugnes)

Together Barret and Mair analyzed the sounds that occur when rocks are crushed in the laboratory to produce mini-earthquakes and also computer models of ‘breaking up’ or fragmentation processes, which is Mair’s specialty.

Read more in the article: