Researchers from the project SEISMOGLAC, Department of Geosciences had good luck when they captured on film the calving of Kronebreen, one of Svalbard's fastest glaciers. They added the soundtrack of the seismic recordings. Seismic Sounds of Calving published on YouTube has now 1200 views. 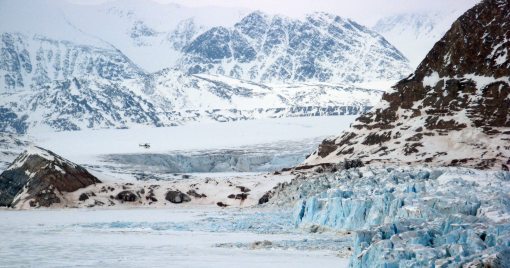 Kronebreen, Svalbard. Approximately 40 % of the World's glaciers contribute to the sea level when calving icebergs. Seismic measurements can be used to measure calvings at safe distance. Photo: Chris Nuth.

One of four calvings this day

This late April day in 2014 there were a total of four calving events from Kronebreen on Svalbard. The helicopter were equipped with professional video camera from a German film company and was on the way to Kronebreen from Ny Ålesund.

The research team had incredible luck when they could film the 40-meter high ice wall as it slid into the sea with tremendous force.

Seismology is a scientific discipline concerned with the study of earthquakes and of the propagation of seismic waves. It is a branch of geophysics that provides information about the composition and state of the planet's interior and deals with monitoring and studying seismic events such as earthquakes, explosions, and icequakes.

Seismic monitoring of glaciers is a new method being used with success in different areas of the world such as Alaska, Greenland and Antarctica.

The seismic signals from glaciers known as ice-quakes and emerge as a result of calving, opening crevasses, or movement of the glacier over Bedrock.

This gave a rare filmcut which the scientists Nuth, Köhler and Weidle could use to make the short film Seismic Sounds of Calving. The video connects the calving film sequence to the passive seismic measurements of the calving signals recorded 15 km away in the research base of Ny Ålesund.

The short film shows how researchers also can use seismic measurements as a tool to study glacier calving, in addition to the common use of passive seismics for earthquake monitoring.

The film Seismic Sounds of Calving on YouTube has now been seen by over 1200 people.

- The passive seismic instruments record high peak signals when large blocks of ice meets the water, says Christopher Nuth, a glaciologist that has conducted research on the glaciers of Svalbard for over 10 years.

- The video plays an audio track created from one hour of seismic data where we can hear glacier calving from the seismometer located in Ny Ålesund.

Svalbard is an ideal location for glacio-seismic research because there are four regional permanent seismic monitoring stations (Longyearbyen, Ny Ålesund, Barentsburg and Hornsund).

The seismic measurements of calving and previous ice quakes in the glacier are used by the researchers to investigate glacier dynamic processes and in particular glacier mass loss through calving and consequently impacts on sea level.

Researchers in the Seismic Monitoring of Glacier Activity on Svalbard - SEISMOGLAC - project analyzing ice-quakes in Svalbard with existing (regional) seismic data. They develop an automated seismic classification system which can be used by glaciologists to study the activity of the glaciers in the past (~ 15 years of existing data ) and also monitor them in the future.

The goal for the research is to gain more knowledge about the effects of climate change on the polar regions where icebergs and glaciers respond to changes in average air temperature, precipitation and ocean/fjord conditions

In particular, to operationally quantify calving and the impact on sea level rise.

The research conducted in the SEISMOGLAC project is interdisciplinary combining both geophysicists and geographers. In addition to Nuth and Köhler the project includes professor of geophysics, Valerie Mauphin, Department of Geosciences, University of Oslo. Other partners are researchers from the University of Kiel and NORSAR.