After over 35 years the Chinese Chang’E-3 mission is the first to visit and land on the lunar surface. CEED, University of Oslo postdoctoral researcher Zhiyong Xiao participates in the mission team, which has just published their first results in Science this week that reveals a vivid geological picture of the landing site on the moon.

The Picture show the Loong (dragon shaped) rock on the landing site on moon. Photo: CNAS/NAOC/CAS.

Exploring the moon, Chang’E-3 and the roover Yutu

The moon has always been fascinating, in all cultures and civilizations, being the closest planetary object to the Earth. An ancient legend in Chinese culture refers to a fairy named Chang’E (the lander name) and her pet Yutu (Jade Rabbit, the rover name), who are living on the Moon. Both arrived safely to explore the Moon.

The Chinese Chang’E-3 spacecraft successfully landed in the northern part of the Mare Imbrium on 14 December 2013, and the Yutu rover was released the next day. Yutu worked for two lunar days on the Moon and traveled ~114 m over the ejecta deposits of a 450 m diameter young crater.

The Chang’E-3 spacecraft (to the left) and the rover Yutu (right) on the surface of the Moon. Photo: CNAS/NAOC/CAS.

Chang’E landed on one of the youngest lava flows on Mare Imbrium. Similar-aged surfaces were never visited by previous Apollo or Luna missions.

Numerous rocks of various sizes are visible at the landing sites, and Yutu took many high-resolution images. Surprisingly, these rocks look very different compared with samples collected previously or lunar meteorites found on Earth. The rock appearance led the team to suggest that the rocks may be coarse-crystalline basalts or dolerites.

The history is in the Moon surface

The Lunar Penetrating Radar carried by Yutu revealed the subsurface structures at the landing site to a depth of ~440 m. So far the sub-ssurface of the Moon is poorly understood: along its traverse Yutu could resolve at least 10 different layers and uncovered the over 3 billion years long history of volcanism, impact cratering, and space weathering at the landing site.

However, Dr. Zhiyong Xiao, one of the scientists, states that the results reported in Science this week are only preliminary interpretations, the wealth of the information deserves further “digging”.

Zhiyong Xiao is Postdoctoral Researcher at the Centre for Earth Evolution and Dynamics (CEED), Team for Comparative Planetology and also affiliated to the China University of Geosciences (Wuhan). 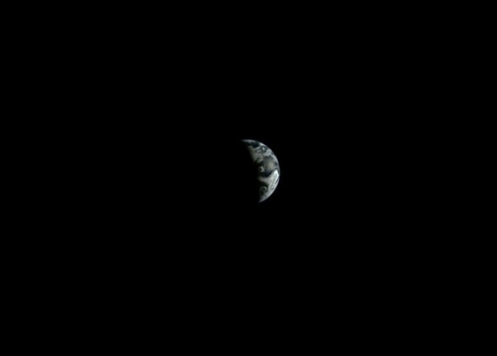 Picture of the Earth taken by the Chang’E-3 spacecraft. Photo: CNAS/NAOC/CAS.

In addition to the rover and other scientific equipment the space craft Chang'e-3 is equipped with an ultraviolet telescope for star gazing, and an extremely short-wave ultraviolet camera that can observe the Earth`s plasma sphere.

Read more about the chinese Chang'e-3 space craft and Yutu, the work of the research team and the first published findings of the expedition in the Science article, reference below.

CEED - The Centre for Earth Evolution and Dynamics