In August, Professor Emeritus Knut Bjørlykke at the Department of Geosciences finally got the result after a lot of work; A 2nd edition and expanded textbook in Petroleum Geoscience (2015). The book spans over a wide range of petroleum geology, from geophysics to sedimentary depositional environment to environmental geology. Several collegues contributed with articles in the book, which will be translated into Chinese. 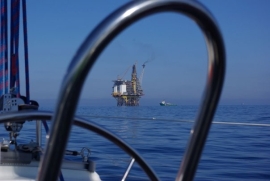 The much used textbook Petroleum Geoscience is now available in a new and expanded second edition.

The first edition was published in 2010, as for the first edition it is professor of geology now Professor Emeritus Knut Bjørlykke, Department of Geosciences who is the editor of this comprehensive textbook.

Petroleum Geoscience is a textbook for professionals working in the oil and gas sector,  and  for students in geology who want a broad overview of petroleum geology and related disciplines.

Bjørlykke is a main contributor in the book, either he writes several chapters in the books himself or together with others. Several other colleagues from the Department of Geosciences have also contributed and there are also external authors from other institutions and from oil companies.

It is an impressive piece of work which is the result  of great effort over several years.

Petroleum Geoscience covers a wide range of disciplines, and gives the reader an overview of the petroleum geology and geophysics. It may also be useful for students interested in related fields such as environmental geology, engineering geology and other aspects of sedimentology:

An important part of the book is  about the quality of reservoir rocks that may contain oil and gas, especially diagenesis which controlling the porosity in sandstones and may be on 15-30%.

In this new second edition is much of the subject matter expanded and four new chapters have been added.

- The textbook is now 665 pages which is 150 pages more than the first edition which  was published in 2010, says Bjørlykke.

Bjørlykke became Professor Emeritus in 2008, but it doesn't seems like the active professor has slowed down.

He is active in research, gives lectures, writes articles, and write textbooks like this book which is presented here. He is also active in the media and contributes in interviews, writing articles in newspapers   and popular geology.

Petroleum Geoscience is in these days in progress to be translated from English to Chinese with planned release in 2016. It is not often that happens with a "Norwegian" authored textbook.
That the book will be published in Chinese shows that this is a recognized textbook. It is much used in Europe, USA and China according to sales statistics for the book.
It is also a recognition of Bjørlykke and the other authors, as well as the academic community the book springs out from.
Knut Bjørlykke has conducted research on petroleum and gas from many different angles, and he has educated an impressive number of geologists at the University of Oslo, and at the University of Bergen (1976-1984).

Bjørlykke says when he started in geology in 1957 there were relatively few professionals in geology with expertise in petroleum geology, while it now counts thousands of professionals.

- All staff members and students at the University of Oslo can download the book for free through an agreement between the University Library and German Springer Verlag, concludes Bjørlykke with a smile.