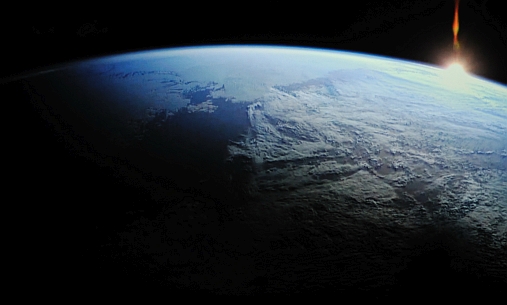 Earth sunrise seen out from space. The methane gas is an extremely effective greenhouse gas, effecting solar energy to warm up the atmosphere. Illustration: colourbox.no

Methane (CH4) is an extremely powerful greenhouse gas, and it contributes to solar energy storage in the atmosphere and temperature rise. And it is powerful, CH4 as contributor to the greenhouse effect is 22 times more efficient than carbon dioxide (CO2).

What happened during the PETM and what has methane to do with it?

A Dutch - Norwegian research team, among them Henrik H Svensen and Sverre Planke from CEED carried out a study on the link between Paleocene-Eocene Thermal Maximum (PETM) and large scale volcanism offshore Norway. The volcanism generated large degassing craters that emitted the methane.

The craters were described by Norwegian researchers more than 10 years ago, some up to ten kilometers in diameter. The craters could only have resulted from violent release of fluids and gases from the underlying sedimentary basins.

The craters were not formed by regular volcanic eruptions, says one of the authors in a newly published article in the American scientific journal PNAS. Frieling, says; “Although the magma did not reach the surface, the North Atlantic was volcanically very active during that period. Magma intruding into deeply buried sediments rich in organic material, such as plant remains, produced large volumes of methane gas. This built up the pressure below the sea floor, higher and higher - until the point the gas violently erupted.”

Pollen and marine algae from sediments give answers

The research team did chemical analyses of pollen and remains of marine algae taken from rock cores from a crater that was drilled by the petroleum industry in the 1980’s.

Henrik H Svensen from GEO and CEED at the University of Oslo, points out that the sediments from the crater revealed  that the methane was released after the onset of the PETM, sometimes during the first 80,000 years.

Release of the methane  to the atmosphere from this particular crater did not trigger the onset of the PETM period, but give an explanation for the long duration of the extreme warmth.

A extremely warm and long period

The Paleocene-Eocene Thermal Maximum - PETM period lasted more than 150,000 years. Until now, this has been a challenge for climate modellers. Climate models predict that after the rapid onset of the PETM, a gradual cooling should have started, but the planet remained extremely warm for another 80,000 years.

The scientists are still searching for an explanation for the extremely rapid warming at the start of the PETM period. On this question there are numerous hypotheses, including thawing of permafrost and methane release from volcanic-related craters in other areas. With the new study published in PNAS the research team has added one more piece in the puzzle, pointing out a source for release of voluminous methane gas during the PETM period.

The PETM period is the best example for a global climate change triggered by the release of greenhouse gases to the atmosphere. "The new study may ultimately provide answers that hold the key to understand the evolution of ongoing and future climate changes", says Svensen.

Centre for Earth Evolution and Dynamics - CEED, University of Oslo