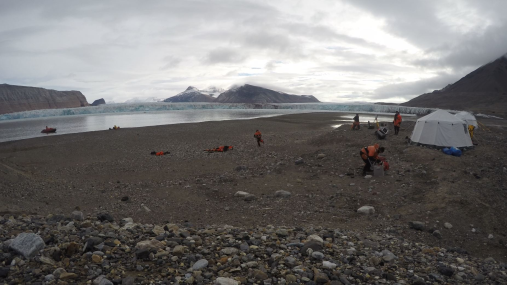 Kronebreen, Svalbard: Field Camp is settled in preparation for the 2 week campaign in August 2016. The main goal of the campaign and project was to calibrate passive seismic and acoustic instruments to quantify dynamic glacier ice loss. Photo: Christopher Nuth

In climate research much attention is drawn to the enormous icebergs at the Artic poles and in the North region. Glaciers hold a huge mass of fresh water stored as ice and one mechanism from which glaciers loss this mass is through calving icebergs.

In the latest years we have seen an increase in temperatures in the polar region, a change which will impact the glaciers, both in terms of ice melt, but also in feedback processes related to the loss of ice through calving. Such calving represents a formidable contribution to sea level rise over the globe.

Seismology: Study of the nature of earthquakes and other natural or artificial sources of vibrations in the solid earth (here glaciers).

Remote sensing of the Earth; use of satellite data to observe a phenomen on Earth (here glaciers) with one single photo or over time using series of photo from one or many satellites revolving around the Earth.

Andreas Köhler, a seismologist specializing in glacier seismology together with colleague Christopher Nuth, an expert on glaciology and remote sensing, both from Department of Geosciences, estimate the flow of freshwater into the sea through iceberg calving related processes.

The team takes out the best from two research disciplines.

Ice loss from glacier calving is one of the most difficult ice loss terms to quantify (e.g. as opposed to surface ice melt) and to date there are no long term continuous and high temporal resolution records of this loss component for any glacier worldwide.

The reason for this is the difficulty in observing calving events that occur over a period of a few seconds, which limit our in­-situ ability to monitor this process.

Christopher Nuth one of the researcher behind the new study explains how they get the time record of the frontal glacier ablation:

– When a calving occurs, a small earthquake caused by the impact of the iceberg into the water can be measured on seismometers. These seismic measurements do not tell us directly how much ice the glacier has lost. However, the ice loss from glacier terminus processes including calving can be determined at lower temporal resolutions using repeat satellite images that capture changes at the glacier terminus.

The researchers are for first time able to quantify calving ice loss continuously, and at weekly resolutions, for over a decade using data from seismometers close to Kronebreen.

Köhler who is the seismologist in the project explains:

– By combining satellite and seismic observations of calving at the same time, we can develop methods to determine the ice loss directly from the passive seismic data. This allows us to quantify ice loss with high temporal resolution continuously and back through time in glaciated regions that are monitored by seismometers,

Kronebreen is a perfect study object  – a large "tidewater" glacier located in Kongsfjorden on the western side of Spitsbergen, Svalbard. It moves through the valley with an average speed of two meters per day, and is the most active calving glacier in Kongsfjord. It is one of the few continuously fast flowing glaciers in Svalbard.

Nuth who has done research in this field for many years says the results are promising:

With their research by combining satellite and seismic recordings, the research team have also gained new insight into factors contributing to glacier dynamic ice loss. They have found that iceberg calving is consistently greatest in the autumn.

With previous studies suggesting that calving is driven by a combination of significant subglacial discharge and submarine melt from warm fjord waters, this research done by Köhler og Nuth provides ­­­­consistent evidence that the combined atmospheric and oceanic forces are important for determining dynamic ice loss.

From a few small case examples, it is apparent that a complex relation between surface melt, rain and seasonality (related to fjord water temperatures) affect the rates at which glaciers loss mass through calving.

The study has been newly published in Geophysical Research Letters, where it has been highlighted by the editor of the journal, which concludes:

"This work reinforces the notion that submarine melt must be explicitly included in models of calving—something that not is generally considered in most ice sheet/glacier flow models."