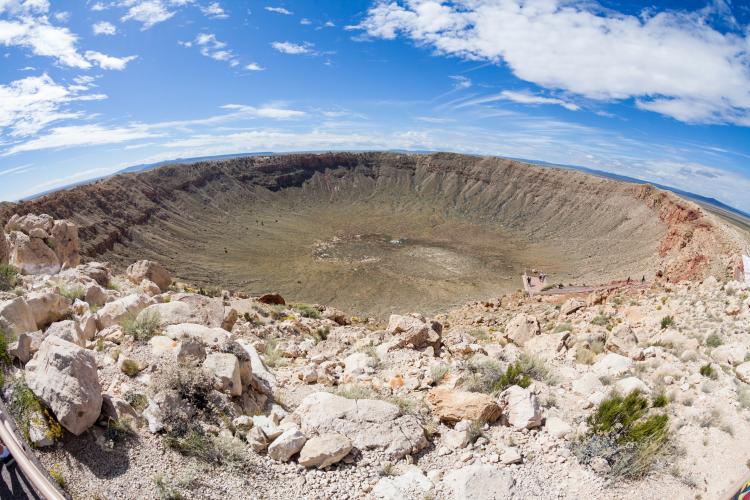 The famous Barringer meteor crater in Arizona, which was created by an impact about 50 000 years ago. Photo: Colourbox

In the case of solar system bodies passing close to the sun, there are two important effects playing a crucial role in the orbital evolution. One of the effects is from the general relativity and the other effect is from Newtonian theory of gravitation.

The prediction of a periodic shift in the orbit (which is technically called precession in celestial mechanics) of Mercury and the subsequent confirmation of this additional shift in orbit from real observations, was one of the greatest triumphs of general relativity developed by Einstein about 102 years ago.

The other effect is from the periodic gravitational influences of Jupiter (technically called the Kozai mechanism in celestial mechanics) from the Newtonian theory which make the orbit narrower and narrower (or in other words, more and more elliptical) and make the orbiting body come closer and closer to the sun after every subsequent revolution.

These gradual gravitational effects from Jupiter have led to the production of some exceptionally spectacular sungrazing comets (i.e. comets which come very close to the sun and hence very bright in appearance from our planet) in Earth's history.

Read the whole article on Titan.uio.no

By Aswin Sekhar and Stephanie Werner
E-mail this page

Jupiter and the theory of relativity blamed for course changes of celestial bodies, phys.org, 27.4.17

Jupiter and the theory of relativity gets the blame for celestial bodies changing course, Science Daily, 26.4.17

Centre for Earth Evolution and Dynamics - CEED, University of Oslo