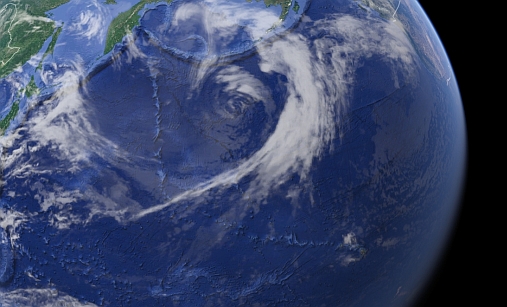 The Hawaiian-Emperor Bend:  This picture taken of satelitte show the bend as a small pattern on the surface. Photo: Google Earth, NOAA, US, NGA; CEBCO; Landsat / Copernicus

Many volcanic ocean islands are created by columnar shaped hot upwellings called mantle plumes that originate near the ~3000 km deep base of Earth’s mantle. Mantle plumes are not much influenced by surface motions of the tectonic plates that slowly move over them. Hence, long linear chains of plume-sourced volcanoes that get older and older with increasing distance from active hotspots can be tracked for hundreds to thousands of kilometres.

A chain of volcanic islands

In the Hawaiian hotspot trail, the Hawaii islands are the youngest in the chain that stretches nearly 6,000 km to Detroit seamount in the northwest Pacific, where volcanism occurred about 80 million years ago. An unprecedented 60° bend characterizes the Hawaiian-Emperor Chain and has been dated to ~47 Ma (Fig. 1). In a new study, recently published in Nature Communications, Trond Torsvik and a group of scientists from Norway, Germany and the Netherlands argue that a prominent change in the Pacific plate motion at 47 Ma was the ultimate cause for the formation of the Hawaiian-Emperor Bend (HEB). But Jason Morgan proposed that already in the early 1970s ─ so what’s new in this study?

Jason Morgan was the first to use hotspots as a reference frame for global plate motions. In his model mantle plumes ─ which are manifested by hotspots at the surface ─ were considered fixed in the mantle, and the HEB was attributed to a simple directional change of the Pacific plate motion (Fig. 1), says Trond Torsvik, but his plate model with fixed hotspots became challenged from the 1980s, and for the past two decades there has been a heated debate about whether the HEB was caused by a change in the Pacific plate motion or a rapid southward drift of the hotspot prior to formation of the bend.

Since the late 1990s it has become clear that hotspots are not totally fixed, says Bernhard Steinberger, one of the co-authors of the paper. That is now generally accepted, he adds, and mantle flow models predict that the Hawaiian hotspot has drifted slowly to the south.

The bend a result of an underlying hotspot?

– In our paper we show why this simply does not work, explains Torsvik as it would require an unrealistically high rate of hotspot motion (~42 cm/year) which would also imply that the Emperor Chain was created in just five million years and Detroit Seamount should only be 52 million years old (Fig. 2a). This prediction is obviously falsified by the recorded Detroit Seamount island ages of about 80 Ma (Fig. 1). Alternatively, a slower hotspot motion towards the WSW could explain both geometry and ages of the Emperor Chain, however such a direction of motion is inconsistent with mantle convection models.

– Our paper is a good example of how very simple simulations of plate and hotspot kinematics can be used to explore which geodynamic scenarios for the formation of the HEB are possible, and which ones are not (Fig. 2a), says Pavel Doubrovine (another co-author on the paper). We cannot avoid the conclusion that the 60˚ bend is predominantly caused by a directional change in the Pacific plate motion. Yet, some southward plume motion is required (blue line in Fig. 2b) otherwise the Hawaiian-Emperor Chain would be quite a bit shorter.

– The main take-home message of our study adds Torsvik, is that neither hotspot drift combined with a steady plate motion, nor the Pacific plate turning its direction over a fixed hotspot, can accurately reproduce the geometry and age progression of the Hawaiian-Emperor Chain. While the change in the direction of plate motion is required to produce the bend, the Emperor Chain would be much shorter (800 km) than it actually is if the Hawaiian hotspot was fixed.

If, after more than two decades of debating the end-member scenarios of plate motion versus hotspot drift, geophysicists will be able to agree that neither of the two is satisfactory – then we can move forward and address a more interesting question: what actually drove the Pacific plate motion to change at about 47 million years ago?

The mysterious bend in the Hawaiian-Emperor Chain, Phys.org, 8.6.2017