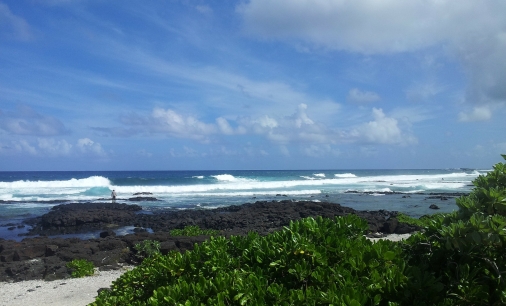 Mauritius: A recently published study in the open access journal Nature Communications, documents evidence for an ancient continental crust beneath the young but inactive volcanoes on the island of Mauritius. Photo: Pixabay.com

It all began with grains of sand collected from a beach on Mauritius. The researchers found that some of the tiny grains of lava contained even tinier particles of zircon, a mineral pointing to a much greater age for the island than previously thought.

Laboratory analyses showed that the young volcanic rocks of Mauritius indeed bury remnants of a much older continent which was connected to India and Madagascar until 85 million years ago. In 2013, the research team led by Professor Torsvik at the University of Oslo (Centre for Earth Evolution and Dynamics, CEED), proposed the name “Mauritia” for the sunken continent.

In a recent study by Torsvik, Lewis D. Ashwal/University of the Witwatersrand, South Africa), and Michael Wiedenbeck/GFZ (responsible/SIMS-analyses), they found more traces of the sunken continent beneath Mauritius.

In a rare volcanic rock called trachyte, they found tiny crystals of zircon, which gave ages of 2500 to 3000 million years.

This is vastly older than the 6 million year eruption age of the Mauritius volcanic rock in which the zircons occur.

This time the zircon grains were not sampled from a beach environment but were extracted from a volcanic rock called trachyte that was collected on the island of Mauritius. Torsvik, an leading international expert on platetectonics and geodynamics explains what environments and geological processes the fragments occurred in a long time ago:

– The volcanoes of Mauritius were formed at a hotspot ─ a stationary "blowtorch" of hot material rising from great depths in the Earth. Also called "plumes"' they ignore the plate tectonic motions that separate oceanic, and continental crust. As the plates slowly move over the fixed blowtorches, long, linear chains of older and older volcanoes can be tracked for hundreds to thousands of kilometers away from the active hotspot. Mauritius is the second youngest in a chain of progressively older volcanic islands that extends from Réunion, the presently active plume site, to the Deccan traps of northwest India, where enormous outpourings of lava took place 65 million years ago.

Evidences for a lost continent in the Indian Sea

When Mauritius was volcanically active starting at 9 million years ago, the lavas poured out, by chance, on top of a small continental fragment, which was then buried several kilometers below the new volcanic island Mauritius.

As the Mauritian lavas rose toward the surface, they passed through the stranded continental fragment, incorporating and dissolving some of it. The old zircons recovered in the new research (up to 3000 million years) are the only survivors of the ancient granitic rock that is now hidden below the island surface.

The long-lost continent of Mauritia attracted massive international media attention in the popular press when first published in 2013 and a Nature News article about Mauritia; Long-lost continent found under the Indian Ocean was among the 10 top most read articles in Nature that year. Also several other researchers paid attention on research to prove the lost continent.

But because that study from Torsvik et al (2013) was based on zircons from basaltic beach sand, it was also criticized by some scientists (see for example an article in National Geographic).

The new study is done on zircon samples taken from the six million year old Mauritian rocks on the island.

The ages of the zircona are recovered directly from the rock and this refute the possibility of human contamination, wind-blown or pumice-rafted beach sand zircons, or zircons ingested by migratory birds on continental crust elsewhere that were later flown to Mauritius and excreted by the birds, as was suggested by some doubters, according to the new study published in Nature Communications.

– Fragments of Mauritia were originally located between Madagascar and India, which separated at around 85 Ma, but the break-up involved a rather complex splintering with continental crust fragments of variable sizes left adrift within the evolving Indian Ocean basin. Our study shows that the supposedly uniform oceanic crust is in fact quite heterogeneous, concludes Trond Helge Torsvik, and adds, ...
that most probably the oceanic crust holds many more pieces of ancient continental crust that are yet to be discovered.

n the Indian Ocean, Fragments of a Continent Where They Should Not Be, New York Times, 3.2.2017

Prof. Lewis D. Ashwal about the main theory and findings.