The permafrost in the Arctic is thawing. Now a new study find that seventy percent of the current infrastructure in the Arctic in the next 30 years has a high potential to be affected by thawing permafrost. This despite if the climate change targets of the Paris Agreement is meet. 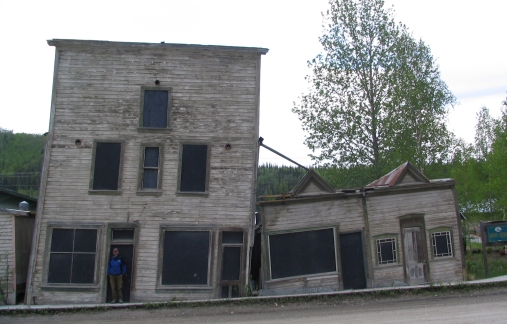 Yukon: A house with subsidence damage as seen in Dawson, Yukon, westernmost in Canada on the border to Alaska. Buildings are among the infrastructure which is affected by thawing of permafrost. Photo: Bernd Etzelmüller/UiO

Scientists warn that by 2050, approximately three quarters of the current population in the Northern Hemisphere permafrost area in the Arctic, may be affected by damage to infrastructure associated with permafrost thaw. This according to a study recently publised in Nature Communications.

The study suggests that most of the Arctic infrastructure will be at risk from permafrost thaw, even if the Paris Agreement targets are met.

Thawing permafrost in the Arctic

The thaw of near-surface permafrost due to global warming may impair critical infrastructure, which could pose a serious threat to the utilization of natural resources, and to the sustainable development of Arctic communities.

Owing to the increasing economic and environmental relevance of the Arctic, information about the potential risk to infrastructure is needed.

The new study is carried out of researchers from Finland, Norway, Russia and Michigan. First author Jan Hjort, University of Oulu, Finland and colleagues conducted an infrastructure and hazard risk assessment in the Northern Hemisphere’s permafrost domain in the Arctic under projected climatic changes, and quantified engineering structures at risk by 2050.

Study of possible risk by 2050

The authors found by statistical modelling of permafrost that most of the pan-Arctic population (approximately four million people), and 70% of transportation and industrial infrastructure is located in areas at high risk of permafrost thaw by the middle of the century, even if greenhouse gas emissions are stabilized or reduced.

The results suggest that one-third of pan-Arctic infrastructure and 45% of the hydrocarbon extraction fields in the Russian Arctic are in regions where thaw-related ground instability could cause severe damage to the built environment.

The authors argue that their results demonstrate the need for detailed infrastructure risk assessments in a warming world.

The authors will be presenting the study at the 2018 Fall Meeting of the American Geophysical Union, Washington on Wednesday Dec. 12 (see abstract). The article in Nature Communications has since it was published 11. Dec. got a lot of attention in the news in media worldwide.