UiO The Faculty of Mathematics and Natural Sciences Department of Geosciences
Main navigation
Back to uio.no
Sub navigation Menu
Research > News and events > Research news > 2020 > New piece of the puzzle added for "the Great Dying"

New piece of the puzzle added for "the Great Dying"

It's not about the Black Death or the dinosaurs dying out. "The Great Dying" is an event in the geological perspective. The largest of all mass extinctions on Earth. We are at the end of the Permian Period, 252 million years ago. 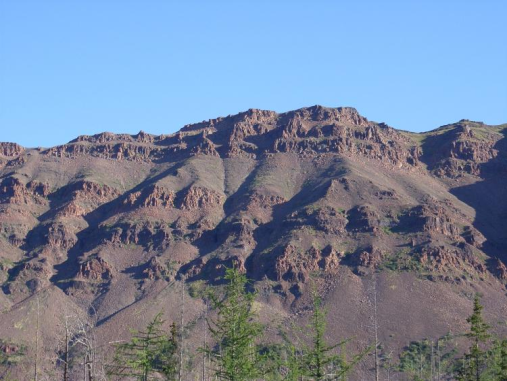 The Siberian Traps are the result of great volcanic activity where for 252 million years ago. The lava flows of flood basalt created a stair-like structure in the landscape seen today as sequences or layers. Here at Norilsk. Photo: Henrik Svensen

Not many species escaped the mass extinction event known as "the Great Dying".

The researchers estimate that 96 % of all life in the ocean died out and that 70 % of all life on land died out. It is estimated that over 90 % of all the species on Earth were exterminated.

And it would take a long time for species diversity to rebuild.

In 2014 a study in PNAS from American and Chinese researchers estimated that the mass extinction event at the end of the Perm Period reached its peak 251.94 million years ago. They found that it was shorter than 100,000 years, and that most of it occurred over a time span of less than 20,000 years.

Theories to explain its cause are numerous and include everything from meteorite impacts and global warming to volcanism and methane hydrate emissions from the seabed.

"Dramatic things were happening on Earth at that time", explains Lars Eivind Augland. He is one of the scientists behind a new study published in Scientific Reports, Nature.

"We are in a geological window when the Earth's land mass had been brought together into a single supercontinent we call Pangea. Hot plumes rising from deep in the Earth's interior formed huge amounts of melt, magma, below what is now Siberia".

The magma penetrated the crust and flowed out on the surface forming thick sheets of lava. Much of the melt also solidified just below the surface where it penetrated into the sedimentary rocks that lay there from before.

Supports volcanic activity as a cause of mass extinction

Augland is a researcher in a Norwegian-Russian research team based at the Centre for Earth Evolution and Dynamics (CEED)/University of Oslo and several Russian universities. The team has worked on the theory that the mass extinction at the end of the Permian period was caused by volcanic activity.

As we know, volcanic activity is associated with heat and degassing from the Earth's interior, and this can release CO2 and other gases into the atmosphere, which in turn can affect the climate.

The team has studied the vast lava provinces of the Central Siberian Plateau, also known as The Siberian Traps. The traps are layers of flood basalt, lava that has come up intermittently onto the surface.

It has previously been documented that those parts of the lava province that formed exactly at the same time as the mass extinction event cover an area of ​​at least 1.6 million km2. Augland and co-authors have found that the area is at least 300,000 km2 larger.

Established the age of the magmatic rocks

Core samples of magmatic rocks from the Taimyr Peninsula, close to the Arctic Ocean, far north of the classical sites where the Siberian Traps are characterised, were analysed at the TIMS-laboratory at the Department of Geosciences, University of Oslo.

The laboratory specialises in determining the age of zircons to high precision with the U-Pb method.

"Geochronological (age) surveys of the Taimyr rock samples show that both the basalt on the surface and the rocks that solidified in the depths have the same age as those found further in on the plateau to the south", Augland explains.

The researchers thus find that the size of the lava province that erupted synchronously with the mass extinction interval is at least 20 % larger than previously thought, and that the volcanic activity at that time, 251-252 million years ago, had been larger than expected.

This supports their hypothesis that volcanic activity was a driver of the mass extinction.

The lava province has, due to its considerable size, been able to emit great volumes of greenhouse gases such as CO2 and methane into the atmosphere.

"Some of the emissions came from the lava, but most were generated by the magmatic rocks that solidified just below the surface when they penetrated sedimentary rocks full of petroleum. The heat caused oil, gas and coal to evaporate into the atmosphere, causing catastrophic climate change", Augland explains.

MASS EXTINCTIONS OF SPECIES ON EARTH:

The Ordovician–Silurian extinction events happened around 445 million years ago. In 3 million years 86 % of the species were lost.

The Late Devonian extinction was about 375 million years ago. 75 % of all the species were lost. This is the most uncertain of the "big five".

The Permian–Triassic extinction event, also called the Great Dying, happened 251 million years ago and killed 96 % of the planet's marine species and 70 % of its terrestrial life.

The Triassic–Jurassic extinction event was 199,6 million years ago. 80 % of all species were lost in the extinction.

The Cretaceous–Palaeogene extinction event happend approximately 66 million years ago. It is believed that 76 % of all species died out.

The magmatic rocks of Taimyr that Augland and co-authors have studied, are special in that they were of great volume, were emplaced at a high temperature and they spent a long time solidifying between the sedimentary petroleum-rich rocks.

Thus, they were probably a perfect source for "long-term boiling" of the sedimentary rocks, which inevitably led to large emissions of CO2 and methane into the atmosphere.

The collaboration between the Norwegian and Russian scientists has been possible because of the Centre of Excellence  CEED (Centre for Earth Evolution and Dynamics).

The centre was started in 2013, and Alexander Polozov from the Russian Academy of Sciences in Novosibirsk was employed as a visiting scientist over a three-year period.

Russian geologists had already analyzed and taken samples from the Taimyr area, but linguistic barriers and distance made it difficult to work together. olozov became an important link between the Norwegian and Russian researchers behind the article.

This article is also published on titan.uio.no

Read the Norwegian version of this article at forskning.no

Studies at UiO in geosciences:

In Norwegian and English: