The volcano eruption on La Palma

How dangerous is it, how long will it last, and what happens if you go near liquid lava? Here, UiO researcher and volcano expert Olivier Galland writes about everything you need to know about the volcanic eruption on La Palma on the Spanish Canary Islands. 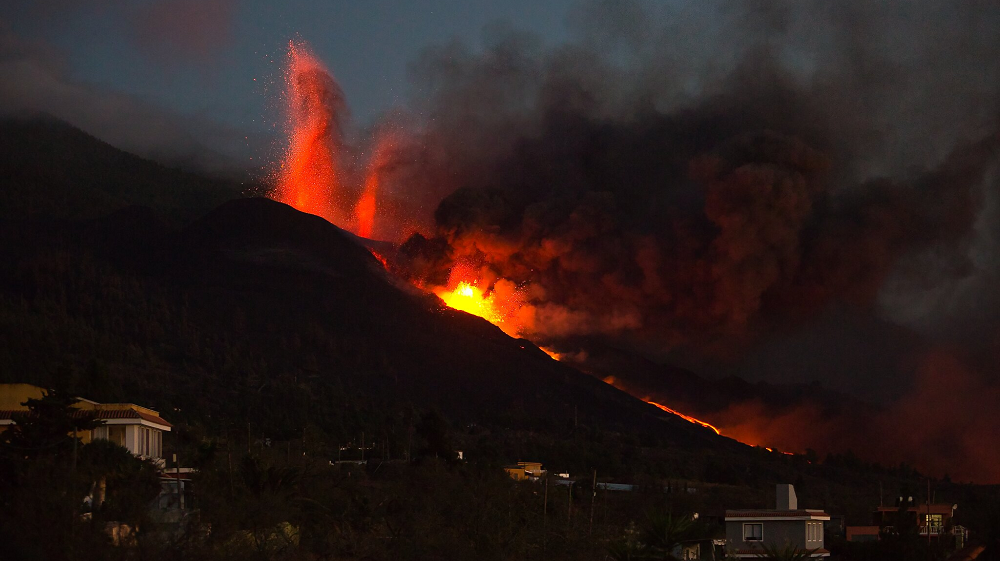 The volcanic eruption on La Palma probably surprised most people, but these islands are well known to us geoscientists as active volcanoes, writes Olivier Galland, researcher at the Department of Geosciences, UiO. Here, the volcanic eruption was photographed on 29 September. Foto: vinx76/flickr/CC BY-NC 2.0

The Canary Islands are worldwide known by tourists, with the sun and warm temperatures, sand beaches, palm trees, and possibilities of all kinds of leisure activities.

Since Sunday 19th September and the onset of the volcanic eruption of Cumbre Vieja volcano, on La Palma, world medias have reminded us that the Canary Archipelago is also active volcanic islands.

The Cumbre Vieja volcano, the name of which means the old summit, suddenly experienced dramatic rejuvenation of part of its landscape.

The precursors of the eruption

It started on the 11th September with the occurrence of thousands of small earthquakes located between depths of 13 and 8 km below the volcano. Above the swarm of earthquakes, the surface of the Earth lifted up of more than 10 cm. This is classic signals associated with the upward injection of magma from the deep Earth toward the surface.

After a nine days journey along a 10 km pathway, the magma breached the Earth’s surface Sunday 19 of September and formed two eruptive fissures, along which magma has erupted since then. Actually, this might have happened as early as 2010, from which several episodes of intense seismicity shook the root of the volcano.

The current eruption is a classic so-called “Strombolian” eruption, named after the Stromboli volcano located north of Sicily, Italy. This eruption type is characterized by flows of lava that stream down the volcano slopes.

Small explosions at the eruptive fissures spit out blocs of molten magmas up to 100 m high. These explosions also pulverize the magma in very fine particles that form small ash clouds.

Currently, the speed of the lava flow front is about 700 meters per hour. It seems rather slow, and this allowed safe evacuation of 5500 thousand people living downhill the eruption site. The 6-m thick river of lava can destroy everything along its way, such that hundreds of houses will eventually be buried.

The lava is extremely hot and is about 1070°C. At this intense temperature, it is not possible to approach closer than a few meters without special protection: it is an invisible “wall of heat”, which can burn the skin after a few minutes of exposure.

The texture of the lava is similar to that of a risen pizza dew that flows under its own weight, and it also contains numerous gas bubbles that cannot escape from the viscous liquid. When the lava cools down below 900-1000°C, it freezes to form a rock, the youngest rock on Earth!

The big question is: How long will the eruption go on? We scientists are not seers and cannot provide a precise answer. However, geoscientists use a set of tools to estimate the volume of magma that is accumulated in the subsurface.

Current estimates suggest that 17 to 22 million cubic meters of magma, the volume of about sixty-five super oil tankers, are available to erupt. Currently, only a fraction of that volume has been erupted, which suggests that the eruption can go on for some time.

If most people were surprised by this eruption, these islands are known by us geoscientists to be active volcanoes. Among the eight volcanic islands of the Canary Archipelago, seven are known to be geologically active.

Among others, the westernmost El Hierro island experienced the last eruption in 2011, whereas Tenerife hosts the majestic Teide volcano (3715 m), which happens to be the roof of Spain.

The last eruption of Cumbre Vieja volcano was only 50 years ago (1971), before todays outbreak. Consequently, the local authorities were already well-prepared when the eruption started.

"The main danger of the La Palma eruption is possible emissions of toxic sulfur dioxide.

The eruption seen in the geological context

In contrast to most volcanic regions, the Canary volcanoes are not located at the boundaries between two tectonic plates. The source of volcanism there is similar to those in Hawaii, La Réunion island, the Galapagos, Yellowstone, and to a lesser degree Iceland.

The source of magmas is between 150 and 30 km depth, in the upper layer of the mantle, which is the layer of the Earth between 30 and 2700 km depth. Even if mantle rocks are solid, rocks at these depths can flow very slowly at speeds lower than 1 meter per year, like ice in glaciers.

Under the Canary Archipelago, the mantle is locally hotter, such that the mantle rocks flow upward in a so-called mantle plume. When the rocks entrained along the plume reach a depth of 200-100 km, up to 20 percent of the rocks locally melt to magma. Small pockets of magma migrate upward and coalesce to form large pockets, which episodically escape and trigger volcanic eruptions.

Threat for people and buildings?

Luckily, the eruption on La Palma occurred sufficiently far away from habitations, so that even if the lava flow is destructive, it does not represent a severe volcanic hazard for humans. It could have been very different if the eruptive fissure opened in the middle of a town, like it happened during an eruption in Hawaii in 2018.

The main hazard with this eruption is the emission of poisonous sulfur dioxide (SO2) gases, the discharge rate being estimated of up to 10,000 tons per day.

Another identified hazard of La Palma is the unstable western flank of the island. A volcanic eruption can destabilize this flank, trigger a giant landslide that falls into the sea and trigger a devastating tsunami that crosses the north Atlantic Ocean. This scenario sadly happened at Anak Krakatau volcano, Sunda Strait, Indonesia, in 2018.

Luckily, this scenario is unlikely during this eruption.

By Olivier Galland
E-mail this page