With quick clay on the agenda – The Tømte Symposium 2022

The Tømte Symposium had an important topic on the agenda this year; quick clay. 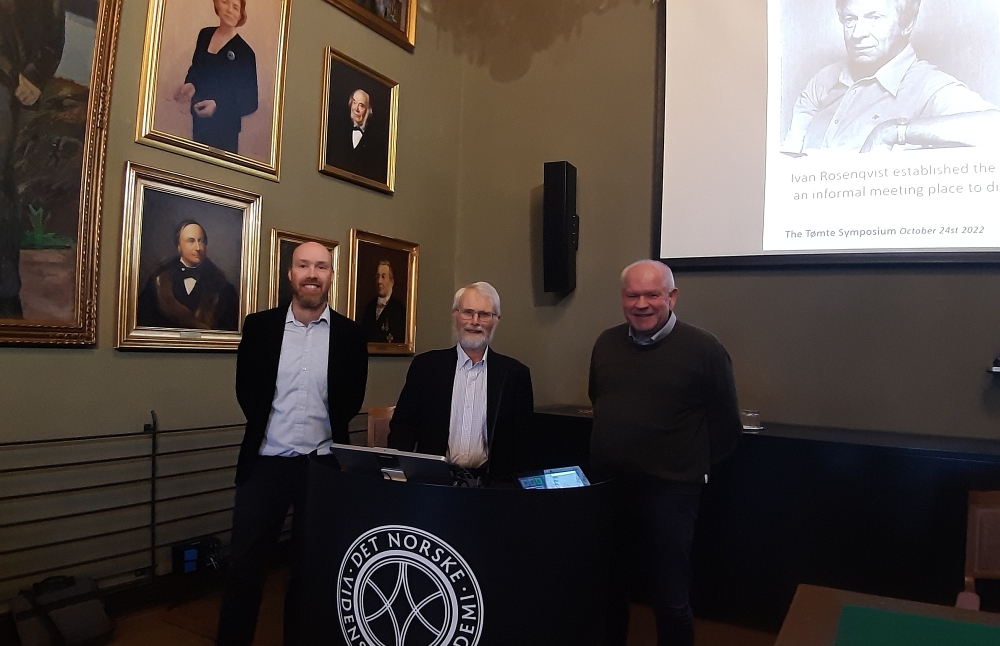 Professors Helge Hellevang (from left), Per Aagaard and Jens Jahren, all from Dept of Geosciences, University of Oslo,
co-ordinated this year's Tømte Symposium. The symposium was dedicated to Ivan Th. Rosenqvist, a pioneer in understanding the problem of quick clay. Photo: GK Tjoflot

The symposium ‘Quick clays – geological constraints and occurences – Rosenqvist tribute’ was held on this slightly grey Monday 24 October in the venerable premises of the Norwegian Academy of Sciences.

With just over 60 participants, the symposium dealt with quick clay, geological constraints and occurences from the perspective of different disciplines and professions. The symposium was an arena for knowledge exchange for researchers, geotechnicians, advisers and others who work with quick clay to share their knowledge. Among the participants were also several students and fellows.

The Symposium was co-ordinated by Prof. Em. Per Aagaard, and Profs. Jens Jahren and Helge Hellevang, all from the Department of Geosciences, University of Oslo. They also contributed to the programme with own lectures.

– There is much quick clay in the ground in Norway, this is because the country was covered by ice during the last ice age and a large area has been below sea level. This has resulted in saline marine deposits, which, after the uplifts, now lie on land and are exposed to fresh water. This can produce clay soil that can potentially become quick clay, explains Per Aagaard, one of the organizers of the symposium.

– There is much quick clay in the ground in Norway.  This is because the country was covered by a very thick ice sheet during the last ice age and when it melted the land was still depressed from the weight of the ice, leaving large coastal areas remained below sea level. This has resulted in the accumulation of saline marine deposits which, after later uplift, now lie on land where they are exposed to freshwater seeping through them. This can change the chemistry of the clay soil and potentially make it quick, explains Per Aagaard, one of the organisers of the symposium.

Overloading such clay, or undercutting clay slopes, can cause it to lose its bearing capacity and strength, with the result that it flows like a thick liquid. Such landslides can occur suddenly, with serious risk of destroying  buildings and infrastructure, and trapping people caught up in the moving mass.

Several large quick clay landslides have occurred in Norway throughout history. Also recently. Everyone remembers the terrible event in December 2020, when a large quick-clay landslide at Ask in Gjerdrum destroyed part of a housing estate during the night.

– In order to reduce the number and frequency of landslides, it is important to understand how and where the quick clay occurs, and not least what triggers the landslides. Therefore, there is a need for knowledge exchange between different professional environments, between geologists and geotechnicians, wich is the focus of such professional seminars as this year's Tømtesymposium can provide, says Aagaard.

Important to put on the agenda

The programme featured speakers from consulting companies, the institute sector and, of course, several from academia. A total of 16 lectures gave a good cross-section and overview of what is happening in the area of ​​cuick-clay mapping, prevention and research on quick clay today. The symposium was opened by Per Aagaard with an introduction about Ivan Th. Rosenqvist's work, and his tradition of using symposia to bring together researchers and students for professional discussion.

An expert from NVE set the scene with a lecture on mapping areas with a real risk of quick clay landslides. NVE has national responsibility for the prevention of flood damage and avalanche accidents. Among other things, a hazard caution map with quick-clay zones has been drawn up.

A representative from NGU presented the NADAG database, where data from geotechnical ground investigations can be extracted. The data is now also available in a full version for access with mobiles.

The rest of the programme had short lectures by professionals from various institutions and professions. At the end of the day there was a panel discussion.

The lectures dealt with various current topics ranging from sampling and mapping of clay terrain, how the clay is composed and what makes the clay "quick", to lectures on applying artificial intelligence for risk assessment.

The lectures were arranged in five thematic areas:

A tribute to a pioneer in quick clay research – Ivan Th. Rosenqvist

He was the first to explain why some clays are quick and what is needed to stabilise the clay. He was internationally known and was active in The Nordic Clay Group, which, among other things, worked to understand quick clay formation and behaviour.

Rosenqvist was central in building up knowledge about clay and clay-rich sediments, and this led to increased attention to the fact that marine clay can become unstable under certain conditions.

The Tømte Symposium is a series of one-day seminars organised by dedicated professionals in biosciences and geosciences. For geology the theme has been environmental geology. The symposium has been held since the 1950s, and many professors and students in geology at UiO have taken part in discussions in the living room of Tømte Gård. Within geosciences, the symposium has been organised most recently in 2016, 2018, and now in 2022, all in DNVA's premises at Drammensveien 78. The events receive support from the Tømtestiftelsen (Tømte Trust).