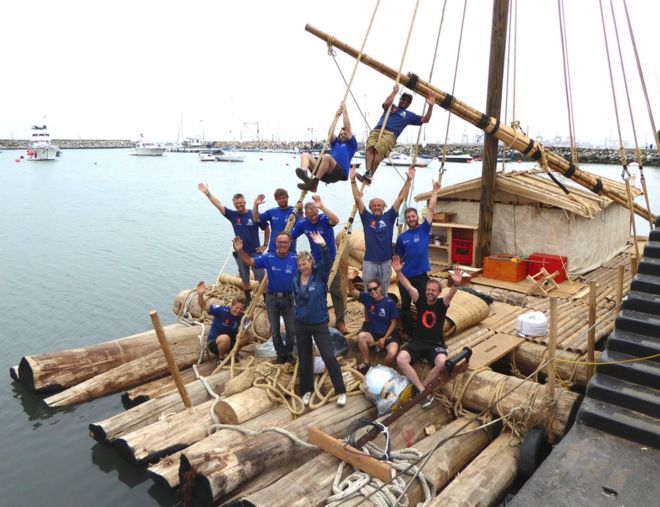 In 2015-2016, the Kon-Tiki2 Expedition sailed two balsa rafts from South America to Easter Island, and halfway back. In order to understand human migration in the ancient Pacific, it is essential to know what sea voyages were possible. While Thor Heyerdahl and his team demonstrated successfully in 1947 that sooner or later currents would naturally carry a raft to parts of tropical Polynesia, we know that effective steering and tracking systems would have been essential for South American mariners to sail towards specific destinations (like Easter Island), and even more so to find their way back to their beloved ones against the winds.

The Kon Tiki 2 expedition showed that the first was possible, arriving at Easter Island December 19, 2015, as the first rafts in modern times. The expedition also showed that even the latter ought to be possible, even though the “Godzilla” El Nino of 2015 prevented the rafts from completing the return voyage.

Cecilie was chief scientist for the expedition and sailed the first leg, to Easter Island. The rafts were equipped for the full-scale ocean and climate research. During the two legs, the rafts made thousands of measurements in order to understand how changes in marine life related to climate change and ocean pollution.

The path of the voyage took us through the so-called “garbage patch” of the Southeast Pacific, and the occurrence of the 2015 El Nino made the oceanographic conditions very unusual (and contributed strongly to the fact that 2015 and 2016 became the warmest years ever recorded, globally).

For this thesis project we invite a student to work to:

The student will learn to handle big datasets (observations and model output), to use budget calculations to analyze the datasets, to scale processes by importance, and to obtain a deep understanding of key components of Earth’s energy budget and how it relates to climate change.