Hydrostatics and ontogeny in endoceratids 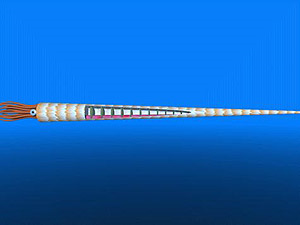 Straight-shelled cephalopods are common fossils with many described species. It has been common to imagine these animals to swim horizontally, but it has recently become clear that a vertical orientation is more likely in some groups. However, it is still believed that the endoceratids, common in the Ordovician, swam horizontally.
This is based on special morphological traits in this group. Is this correct? What role did the deposition of ‘ballast material’ during growth play for the buoyancy?

The project will consist in studies on fossil material, and simple mathematical modelling of balance and buoyancy. This will involve some programming. Similar work is presently being undertaken by researchers in other countries, with possibilities for cooperation.

The project is suitable for a student in biology or geology with some interest in physics.

The thesis is offered by: Natural History Museum (NHM)