Scientific Contributions of E. A. Hylleraas

The old quantum theory of Bohr gave a fairly satisfactory description of the one-electron hydrogen atom but failed to describe the two-electron helium atom. With the creation of modern quantum mechanics in the mid 1920s, it therefore became important to establish that it worked also for two-electron systems by solving the Schrödinger equation for the helium atom. 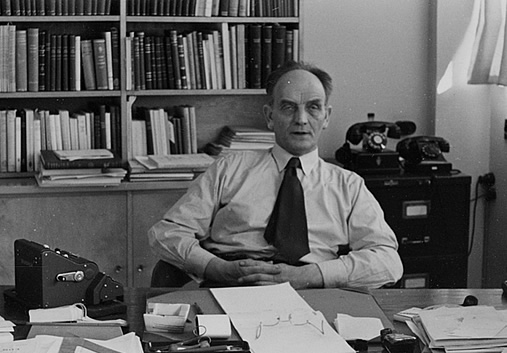 In 1929, Hylleraas invented a method that gives an accurate description of the relative motion of electrons in atoms and molecules. Using this method of explicit correlation, he obtained an ionization potential (the energy required to remove one electron from the atom) of 24.58 eV for helium, close to the experimental value of 24.59 eV. This result confirmed the validity of quantum mechanics, since the tiny discrepancy of 0.01 eV was understood to arise from effects (relativity and nuclear motion) neglected in the calculations.

Hylleraas’ method of explicit correlation was in 1933 used by James and Coolidge for the two-electron H2 molecule with excellent results, but its generalization to systems with more electrons proved difficult. Calculations on larger molecules were instead performed with less accurate methods. However, since the 1980s, steady progress has led to a situation where general molecules may be treated efficiently by explicit correlation. Therefore, Hylleraas’ legacy is now felt strongly in chemistry, where his method is used routinely by chemists all over the world for accurate studies of chemical systems.

Apart from his pioneering studies of atoms, molecules and crystals in the 1920s and 1930s, Hylleraas introduced a number of mathematical techniques that have become standard tools in atomic and molecular electronic-structure theory.

Hylleraas’ work on helium in the 1920s probably represents the first important use of computing in physics. At the time, he employed an electric desk computer of the make Mercedes– Euklid (Model 11 or 12); in the 1950s , Hylleraas used the Brunsviga 18RK machine exhibited here.

With the  emergence  of  digital electronic computers in the 1940s and the enormous improvements in computing power since then, computation has become an indispensable part of modern science, including physics and chemistry. In chemistry — in particular, we simulate molecules quantum mechanically, using methods pioneered by Hylleraas in the 1920s for high accuracy.