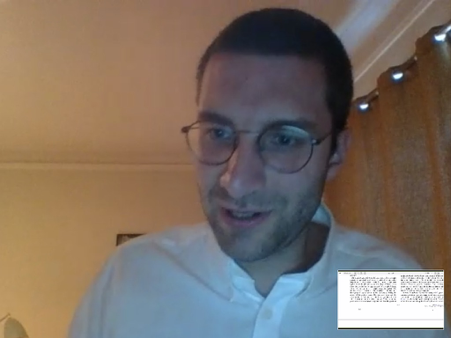 Because of the corona pandemic, the defence was held online, with Sigbjørn defending from home. Even with this restriction, the trial lecture and defence were successfully carried out using Zoom software, thanks to Senior Engineer Morten Berntsen at the Department of Chemistry, who was in charge of the Zoom event. One advantage of online events is that it may be attended by people from all over the world. Sigbjørn’s defence was attended by more than 60 people — a record attendance for PhD defences at the Hylleraas Centre.

We congratulate Sigbjørn on an impressive defence under very unusual circumstances! 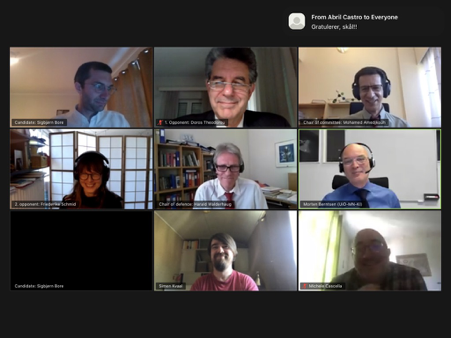 Here is Sigbjørn's own summary of his thesis:

Computational chemistry complements experiments by allowing us to study chemical phenomena on a molecular level using computers as virtual laboratories. A particularly challenging, and important, class of systems are mesoscale biological systems, including  viruses, cells and microorganisms. They are on human scale very small, but for computers very large as they involve many billions of atoms. To study such systems, coarse-grained simulations, which use simplified models for molecules to reduce the amount of computation, are well suited. My thesis is on one variant of such methods, called hybrid particle-field molecular dynamics.

Hybrid particle-field molecular dynamics has predominantly been used to study simple polymers. The extension to more complex systems, such as biological systems, requires further method development and new models. In my thesis, I developed new methodology and software capable of representing electrostatics and constant-pressure simulations, new models for proteins and charged lipids, as well as applications of these models. The work contained in this thesis thus provides key steps towards large-scale realistic representations of biological systems.