Earlier this summer post doctoral fellow Khuong Dinh from the Department of Biosciences and Nansen Legacy, received the prestigious Young Research Talent grant from the Research Council of Norway. 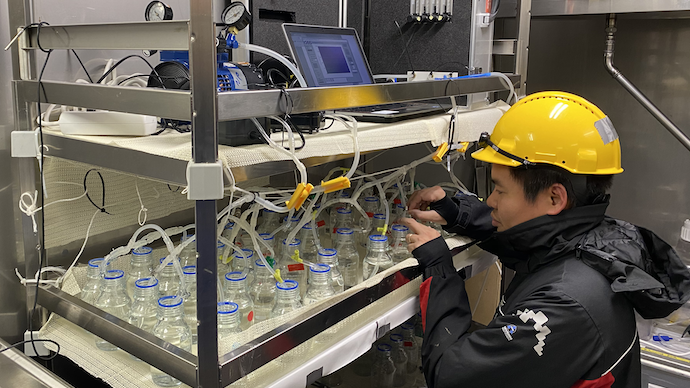 Khuong Dinh is currently on his way to the central Arctic Ocean on board the RV Kronprins Haakon with the Nansen Legacy project, from where he has answered some questions about his granted proposal.

Congratulations with the Young Research Talent grant! Your project aims at investigating the response of boreal-arctic zooplankton to multiple stressors. What are stressors?

Why do you attempt to study several stressors simultaneously?

– While marine heatwaves are typically short periods of extreme warming occurring randomly across space and time, ocean acidification is a long-term trend. Marine organisms generally have to cope with the effects of marine heatwaves, ocean acidification, and their interactions. The concern is that the interactive effects of these stressors can generate a total impact much greater than a simple addition of single effects, adding one effect on top of the other, hence the consequences for marine organisms.

How do you investigate the response of zooplankton to multiple stressors?

– We plan to expose Arctic copepods to simulated marine heatwaves, ocean acidification, and their combination in late summer or early autumn when stressors typically occur at a high intensity and severity. We will track for immediate responses of exposed copepods during the exposure period, corresponding to a heatwave event. Then we will follow the delayed effects on the diapause of these species during overwintering and potential carryover effects of these stressors on the offspring generation born in the spring-summer of the coming year.

What are the greatest challenges in your work?

– How multiple stressors may affect the overwintering of Arctic zooplankton is still a mystery, and uncovering this is challenging with series of observations during the entire long, dark and cold winter conditions. Furthermore, exploring the ecological consequences of multiple stressors across generations is also not an easy task. We generally say that “a perfect bird gives a perfect egg”, so we want to explore if stressors-impacted copepods may produce low fitness offspring.

Why are you using zooplankton as study organisms?

– Arctic zooplankton such as copepods utilize energy from photosynthesis organisms such as algae. Copepods are an important lipid-rich food source of Arctic fish, birds, and even mammals such as whales. Therefore, stressor-impacted copepods may have cascading effects on the entire Arctic food web.

– In the last 10 years, I have studied multiple stressor effects on various species across ecosystem boundaries. There are significant aspects of the work that we are planning in the young research talent project and our work in the Nansen Legacy. Specifically, the primary focus of my young research talent project is assessing the interaction of marine heatwaves and ocean acidification across overwintering of the Arctic copepods has not been investigated before . There will be a strong synergy between YRT and Nansen Legacy in sharing the research facility and expertise. Most importantly, both projects will help provide a more comprehensive assessment of how multiple stressors affect Arctic zooplankton, which is much needed for improving ecological risk assessment and Arctic monitoring programmes.

As a last question, do you think that with enough efforts scientists will be able to forsee all effects and responses of different stressors on Arctic marine ecosystems?

– I really hope so, but to be more realistic, I hope we can assess long-term effects and the evolutionary responses of Arctic (and more generally – global) marine species to dominant stressors, which are key drivers for changes in Arctic marine ecosystems. As a scientist, I will devote all my effort to this purpose.

By Charlotte Stark
E-mail this page