This year's lecturer is Marianne Fyhn

MNSU has named Marianne Fyhn from IBV Lecturer of the Year 2021. She was nominated by the Biovitenskapelig Fagutvalg, for her work in making the courses exciting and useful for students. 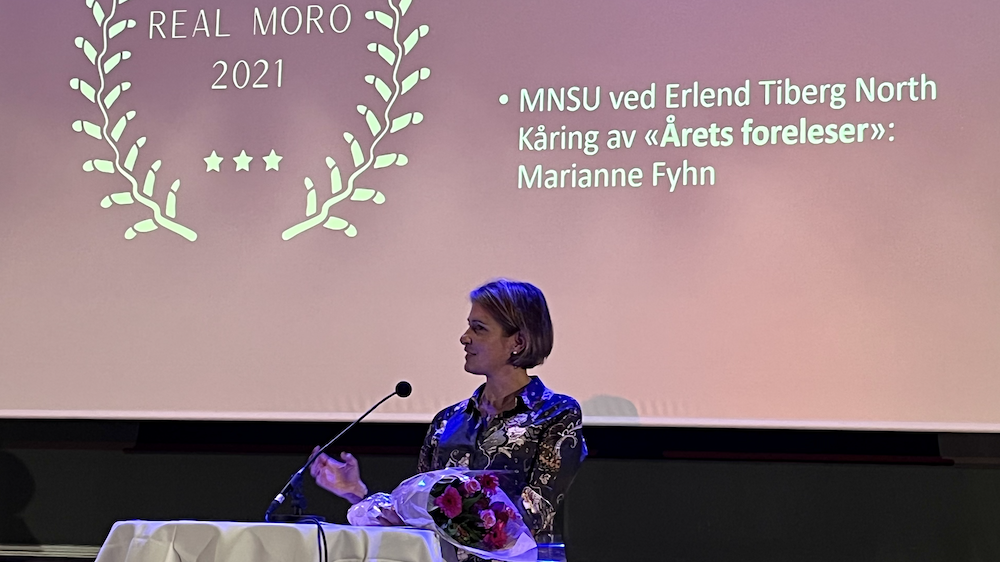 Marianne Fyhn was named Lecturer of the Year during the event REAL fun 2021.

The Mathematical-Natural Science Student Committee (MNSU) has named Professor Marianne Fyhn from the Department of Biosciences Lecturer of the Year 2021. She was nominated by the Bioscience Committee (BFU) for her work in making the subject exciting and useful for students.

The Bioscience Committee points out that Marianne is a knowledgeable and engaging lecturer who really arouses the students' interest in the subject. She is calm and relaxed at lectures, and takes the time to explain well while there is always time for questions.

Marianne is a hard-working lady who does not take any shortcuts. She creates her own, good assignments for group lessons and makes sure to write learning goals in subjects that otherwise lack this.

A huge boost to be named Lecturer of the Year

Marianne Fyhn thinks it was great to receive the award as Lecturer of the Year. When it is the students who choose, then one must have hit something that means something to them. There are so many good lecturers, educators and professionals, so that the students this time saw her is overwhelming and quite incomprehensible.

Teaching is in a way a rather lonely business where you never quite know how things are experienced by the students. You have a feeling for how you think it goes based on the students' commitment, type of questions and course evaluations, but getting such recognition as Lecturer of the Year is a huge boost.

Marianne was incredibly grateful to receive this feedback that some of what she does actually makes a difference for the students. Hopefully, this has led to them being more inspired to learn and know more.

- Perhaps the most important thing for me is that it provides inspiration to continue to develop my own teaching and then it gives a reassurance that yes, what I do is not so bad already, says Marianne.

Commitment for the students

Marianne Fyhn does not think that her teaching methods are particularly innovative. She tries to use what is available of aids to break up the teaching and get the students engaged. There are such standard things as summing up with a sidekick, discussions in small groups, small quizzes, reflection assignments, but there is a lot to be gained from learning from other people's experiences.

Marianne has thought a lot about the students during the time we have been through. They have really been deprived of some of the best things about their study time, which is about getting to know others through academic activity, but not least all the extracurricular that is an important part of the study time.

At first Marianne thought it was hard to hold lectures on a screen, but eventually she got used to them being there even though she did not see them. There were quick responses in the chat if the group was too large for oral dialogue, so it got much better over time. There was no substitute for physical meetings, but Marianne believes that for some it was easier to ask questions via chat and email.

In a large course Marianne runs, she has a group of fantastic assistant teachers, who made a formidable effort to develop an online replacement for laboratory exercises. Marianne really does not hope that it is necessary to run everything digitally again, but she will probably take parts of the digital with her as an additional tool in the future.

The Bioscience Committee emphasizes in the nomination that even after society reopened, Marianne Fyhn was among the few who have been good at taking into account that not everyone is equally comfortable with showing up physically, and has made sure to stream her lectures on zoom in addition to posting recordings afterwards.

Marianne herself says she wanted to take into account that there are many who can not meet for various reasons. She strongly encourages students to show up for their own learning and social interaction, but she still wants to reach out to the students that we continue to offer partially digital solutions.

Marianne actually thinks it works quite well to run a hybrid program with physical lectures that are streamed, and where students can ask questions online. Then she can take the questions continuously whether it fits like this or collect in blocks.

- I will continue with this in the spring, and will probably then also make sure that we get an online solution for group teaching. It does not cost much for me, but I think it means a lot to those of our students who do not get to meet, says Marianne.

A thankful task to teach physiology

Marianne Fyhn thinks it's fun to use things from the media or something she thinks they know a little about. There may be things that might be unexpected in relation to what they have just gone through, and then it can be instructive to reflect on it. She thinks that this is quite festive, and then she thinks they can like it too.

- One thing I think I do quite well is to show my own commitment to the subject, how fantastically exciting the things we know, but not least what we do not know. I have an incredibly grateful task which is to teach physiological processes, says Marianne.

This has to do with how humans and other animals have solved all the challenges that one has, by having to live a life in water or on land. There is an infinity of things to wonder about as long as you take the time to do so, and that is exactly what we can do in the field of physiology.

Physiology is a subject where students really get to use what they have learned in other subjects, to understand animals' amazing adaptations and how evolution has driven the most incredible solutions for animals to be able to live in the most extreme environments. It is not difficult to come up with exciting fun facts and just learning how our own body works, is something everyone very easily relates to and is interested in.

This is noticed by the students. The Bioscience committee points out that Marianne uses many practical examples in her lessons, which gives students motivation by seeing what their theoretical knowledge can be used for further in working life.

Marianne Fyhn also hopes that she will create a safe learning environment, where students and lecturers learn from each other, and where it is allowed not to know. Marianne says that she does not know everything, and is not afraid to show if there is something she can not. However, she tries to answer absolutely all questions, be it during lectures, in group lessons or outside teaching hours. If there is something Marianne do not know, she checks it up and comes back to the students. Or she can ask them to investigate it, so they can learn more together.

Marianne often experiences that when students notice that she answers questions, they come back more easily with new things they are wondering about. This means that they also develop a greater interest in the subject, which in turn means that they work and learn more. If the students feel seen and taken seriously, then they become more confident in their own learning. It is ultimately up to those who have to do the work of learning, but if you can inspire and facilitate good learning, then we will come a long way together.

Further development of courses and teaching

Fyhn has some thoughts about what she wants to do to develop the teaching, but as for many others she does not have enough time to develop things as she would like. Marianne finds teaching inspiring and fun, especially when she has enough time to prepare and be there for the students.

There is nothing more rewarding for Marianne than to really make something you yourself are proud to teach, and try out with the students. On the other hand, she can think of nothing more stressful than teaching, when she feels she does not have the opportunity to set aside enough time.

- In my everyday life, lack of time is the biggest obstacle from being able to go 'all in' and develop courses and teaching as much as I really want to. Quite often I have the feeling of not reaching out, so therefore it was extra nice to get such recognition as this award, Marianne concludes.