In these unusual and worrying times of the corona pandemic, most of us are staying safe in our own home in solidarity with each other. We in the research group, at least, are lucky to be able to work from home. While we wait for the virus spread to decline, it might be in need to think about something else between news updates. We therefore below shamelessly recommend some radio podcasts involving group members from relatively recent times. OBS! These radio shows are all in Norwegian, unfortunately! 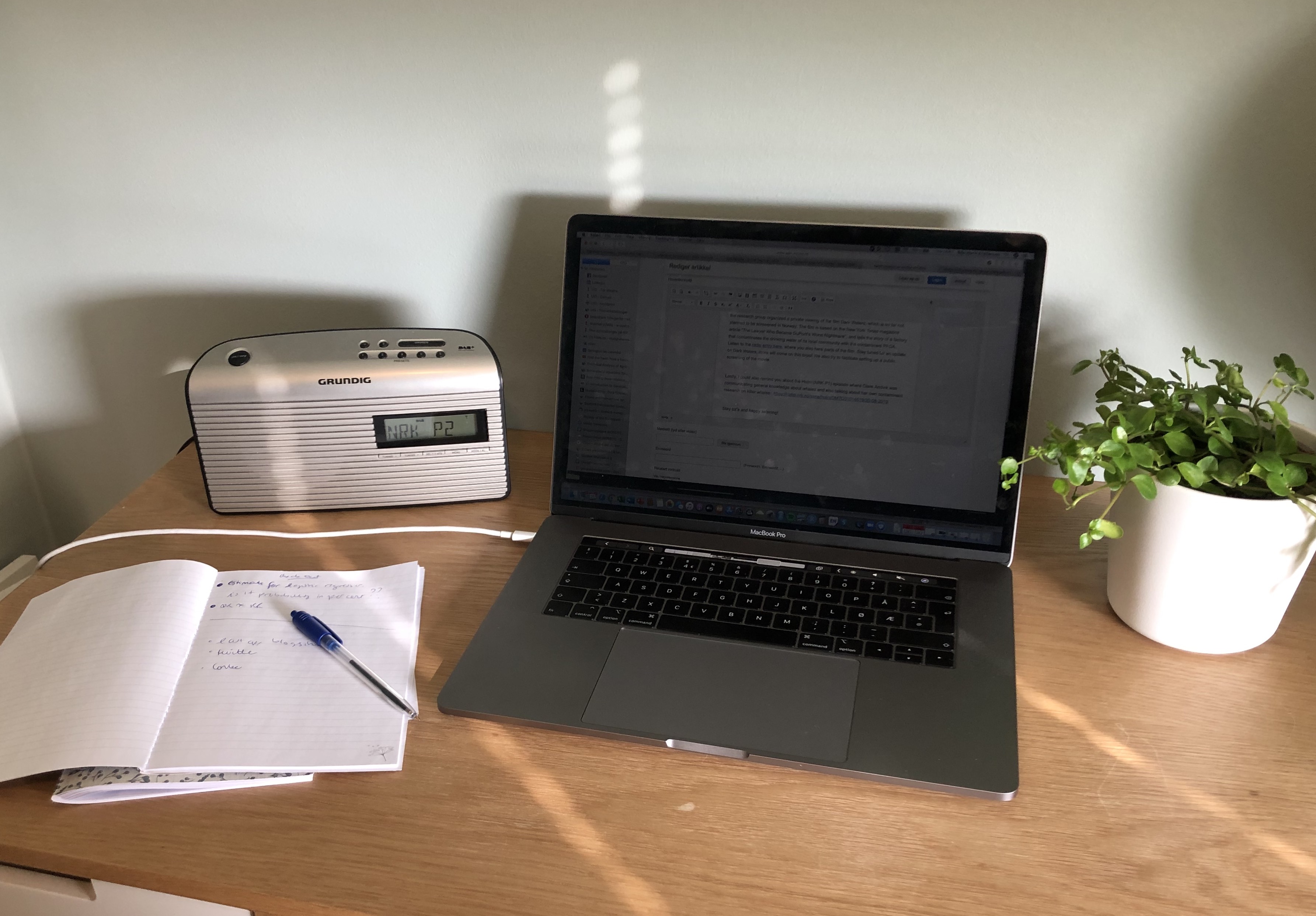 During this home office period, it is necessary to include some breaks. How about some interesting radio podcasts about contaminants?

In February 2020, Norway and all of the European Union banned the siloxanes D4 and D5. Siloxanes are a group of chemicals that most of us have at home in our bathroom, as they are commonly used in hygiene products to make the material feel soft and smooth, such as in shampoo and skin lotions. Head of our research group, professor Katrine Borgå, then at the Norwegian Institute for Water Research (NIVA), led the research team that documented the bioaccumulative ability of siloxanes in the food web of the lake Mjøsa in Norway. This was an important contribution to this recent regulation of these toxic compounds. Katrine was interviewed about this process in this episode of Ekko Science at NRK P2 (Norwegian Broadcasting Corporation).

Following this update on the siloxanes, Ekko received a lot of interest and questions from the public, and Katrine and PhD candidate Julie Sørlie Paus-Knudsen were invited to the expert panel of two different Q&As about environmental contaminants hosted by Ekko Science. There was only one session planned for the public to get their questions about contaminants answered by experts with Katrine in the panel, but due to high interest, NRK organized a second session three weeks later with Julie in the panel.

The public showed interest in a range of contaminant topics, but specifically people are worried about contaminants in the fish we eat, contaminants leaching from the plastic we wrap our food in, pesticides in our vegetables and microplastics in our hygiene products. This huge interest in contaminant issues shows that there is a need for more common knowledge about the effects of specific contaminants and products, but also a large concern and interest for these topics. People are concerned about their own health, the environment and the health of their children.

If you wonder about any of the following questions;

- Do a get a smaller contaminant load from less fatty fish compared to fatty fish?

- Will you be poisoned by the contaminants that you have stored in your lipids, if you are on a diet and loose weight?

- Why does it need to be microplastics in tooth paste? (spoiler: it doesn't),

then check out the first Q&A (Ekko spørretime) with Katrine and the second Q&A with Julie!

Another radio entry at Ekko from February also included inputs from Julie and Katrine, when the research group organized a private viewing of the film Dark Waters, which is so far not planned to be screeened in Norway. The film is based on the New York Times magazine article “The Lawyer Who Became DuPont’s Worst Nightmare”, and tells the story of a factory that contaminates the drinking water of its local community with the contaminant PFOA. Listen to the radio entry here, where you also here parts of the film. Stay tuned for an update on Dark Waters, more will come on this topic! We also try to facilitate setting up a public screening of the movie.

Lastly, I could also remind you about the Holm (NRK P1) episode where Clare Andvik was communicating general knowledge about whales and also talking about her own contaminant research on killer whales.