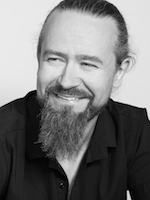 Associate Professor at the Department of Informatics, University of Oslo, and Visiting Scholar at UC Berkeley, California.

The Study book for Logical Methods is a useful supplement and a practical support book for those who use the book Logical Methods. The book contains tips and tricks, elaboration and explanation of problem areas that normally is considered difficult, additional exercises with solutions, and solutions to over half of the exercises in Logical Methods. Read more on https://www.universitetsforlaget.no/nettbutikk/logiske-metoder.html.

This is my first book, and it came out in July 2014. The purpose of the book is to give a solid foundation for study in the sciences, and to introduce and expain the most important and essential concepts within mathematics and science. The book is based on lecture notes from the last four years of teaching INF1080 and is intended for first semester students. Read more at https://www.universitetsforlaget.no/nettbutikk/logiske-metoder.html.

This is Department of Informatics's first online course, based on INF1080/IN1150 – Logical Methods. See https://logiskemetoder.no/nettkurs/ (in Norwegian).

In 2013, I took the initiative to establish UiO: Experiences, a science communication project funded by the The Research Council of Norway. The project is about creating greater interest in science. The primary means is to set up temporary booths, zones, laboratories, and experiments in places where there are many people in order to get positive attention. The idea is to create science-based entertainment that can both challenge people's perceptions about what science is and do it in an interactive and surprising way. The project aims to create experiences that give rise to wonder and insight, invite interactivity and dialogue, explore science in physical and concrete ways, and do something novel, different and surprising. During the summer of 2013 we visited the amusement park Tusenfryd and performed scientific experiments relating to the attractions of the park. During the summer of 2015 and spring of 2016, we continued to make a Megakopter with 48 propellers and set a Guinness World Record. Read more at http://opplevelser.uio.no/.

In 2011, when Ole-Johan Dahl's House opened, I helped establish Open Zone for Experimental Informatics (the Zone), a makerspace and a student laboratory at the Department of Informatics at the University of Oslo. The idea was to create a project-based meeting place for engaged and curious students, a different learning environment, and a creative playroom. The goal is to: (1) Collect and showcase good student projects. (2) Increase the commitment, curiosity, and enthusiasm at the entire department, for both students and staff. (3) Communicate the field of computer science to a wider audience. (4) Create a meeting place for creative and engaged students. Read more on http://sonen.ifi.uio.no.

My academic interests are logical calculi, proof theory, mathematical logic, complexity theory, cellular automata, combinatorics, and the philosophy of mathematics, but I am also interested in algorithmic art, graphics, and visualizations. My PhD thesis is about sequent calculi for first-order logics with free variables.