Software control architectures for mini-grids can be applied to a range of smaller scale power systems, from stationary heat and power systems in buildings to energy systems for ships. Energy systems, irrespective of application, consist of energy generators, energy storage, and end users (energy converters).  With the advent of new advanced ICT it is now possible to control power and energy flows in all kinds of energy systems. The goal of this thesis project is to leverage a suitable software control architecture to manage the mini-grid of a ship and evaluate this architecture in terms of correctness and performance. 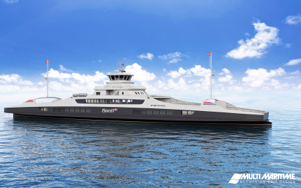 In recent years there has been an increased interest in the maritime industry to convert propulsion systems for ships to electric drive trains and hybridize with batteries, as this both saves fuel (diesel or LNG) and reduces local and global emissions.  In Norway there are now many new electric and hybrid electric car and passenger ferries in the making, which soon will be in operation.  These ferries will all need to charge the batteries with power from local stationary electrical distribution grids, and all of the power system components on-board a ship will be connected to a common DC-grid.   In order to reach zero emission, there are now also initiatives to introduce hydrogen and fuel cells into electrically driven ships.  This will require a solution for hydrogen supply and bunkering, which also will have some energy demands.  How to introduce battery and hydrogen technology into heavy duty transport applications  such as ships, is addressed in a new national research center by the name MoZEES (www.mozees.no).

The overall system described above, i.e., battery charging system on land and hybrid electric battery system on the ship (with or without hydrogen and fuel cells), can be defined as a mini-grid.  The system will need a smart real-time control of power flows in order to avoid power quality and imbalance problems, both during charging (by the quay) and discharging of the battery (during operation). This system will have features and characteristics similar to other integrated energy systems, e.g. local power grids with renewable energy generation and batteries.

In this project we propose to investigate alternative architectures and methods that can be used to control the power on the DC-grid on a ship.  This method should be based on abstract and scalable (cyber-level) representations and models of key components in the system (power generators, energy storage, etc.).  That is, the models of the subsystems and key components will be aggregated into virtual devices that hide their internal complexity. This method should ideally be based on standard and open protocols for communication between components of different manufacturers.

Specific tasks for the Master student