Homogeneous catalysis and organometallic chemistry is an important research area in the Catalysis group. The group, led by Professor Tilset, focuses on synthesis, characterisation and testing of metal complexes with the aim to develop and understand new reactions, catalytic as well as non stochiometric.

The platinum complex above is capable of cleaving the strong, normally very unreactive, C-H bonds in methane – the major component of natural gas.

The focus of the organometallic and homogeneous catalysis group is on two overlapping problems – (1) catalysis of industrially large-scale processes such as C-H activation of hydrocarbons in petrochemical feedstock (petroleum, natural gas), and (2) catalysis of smaller-scale processes that may lead to fine chemicals and advanced organic compounds. In particular, recent studies have been targeted at organometallic complexes of noble metals, such as rhodium, platinum, and gold. 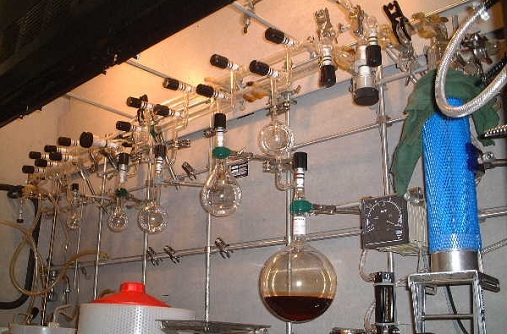 Vacuum line for handling of air-sensitive organometallic compounds and reagents.

Platinum is a rare and expensive metal that is well known for its use in jewelry. However, it also finds important uses as a catalyst. Members of our research group have prepared platinum complexes, stable at room temperature, that react with the strong C-H bonds in hydrocarbons under rather mild conditions. We now attempt to incorporate the motifs of these platinum complexes into porous MOF materials in a very exiting collaboration within the catalysis group. These efforts very nicely bridges the worlds of homogeneous and heterogeneous catalysis.

The rhodium complex above catalyzes the formation of three-membered rings, an important substructure in natural products. Note that our catalyst leads to the cis geometry at the 3-membered rings. Previously available catalysts tended to form the trans geometry preferentially.

Rhodium is a rare and expensive metal that is well known for its use in automotive engines. It is also a very efficient catalyst in large-scale catalytic processes, such as production of acetic acid from methanol, hydroformylation of olefins, and much more. We recently developed an exciting rhodium complex that is a very efficient and selective catalyst for the formation of strained three-membered rings (cyclopropanes). Such rings are important substructures in many natural products, pharmaceutical agents, perfumes, and so on. The successful development of the rhodium catalysts required the use of nearly the full range of methodologies available to us – organic and organometallic synthesis, spectroscopic structure determination, spectroscopic mechanistic studies, catalytic test reactions, single-crystal X-ray crystallography structure determination, and theoretical studies of reaction mechanisms.

Gold may be the most well known of the noble metals and is usually considered to be chemically unreactive. In recent years, the international chemical research community has however found that gold in many forms – salts, nanoparticles, or molecular complexes – can be very efficient catalysts for a wide range of processes. We have recently initiated studies aimed at using gold for C-H activation, i.e. to compare platinum (as discussed above) with gold. While this goal has not yet been realized, the research has led to an improved understanding about fundamental gold chemistry which will hopefully lead to catalytic systems. For a demonstration of the central role of gold in chemistry, you may want to look (and hear) the "Periodic Table of Rock" video on YouTube.

The organic group moves around the gold atom in the middle in a rock-and-roll fashion. This behavior can be seen by NMR spectroscopy.