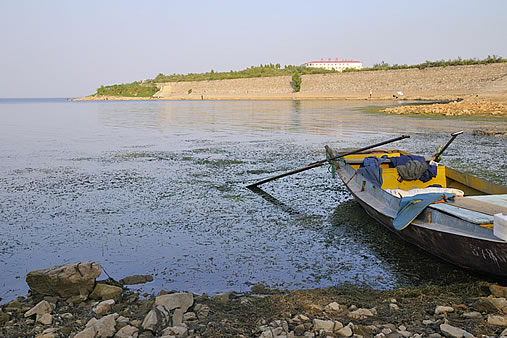 Eutrophication is usually the main cause for not fulfilling the requirements for good ecological quality in agricultural districts. Abating the cause for algae blooms is a complex issue that requires multidisciplinary system and process understanding and stakeholder ownership to ensure sustainable water resource management. Furthermore, there is a lack of a coherent research where catchment processes are linked to societal response.

SinoTropia is a Sino-Norwegian transdisciplinary project addressing these issues by assessing the impact of changes in environmental pressures on mobilization, transport and impact of nutrient fractions to the Yuqiao reservoir in Tianjin, and societies response to abatement actions.

The agricultural soils in the local watershed of the YuQiao reservoir are extremely over fertilized. This is mainly due to that there is a large production of husbandry producing vast amounts of dung that is either applied as manure onto the fields or just disposed of in the environment.  What is clearly needed is either a regulation of the stock or a system for collection of the dung. The effect is amplified by soils that have a very poor ability to adsorb phosphorous and an impermeable clay layer under the Ap (plough) layer forcing all the runoff though the phosphorous saturated agricultural soils directly into surface waters. Furthermore, the sewage from the local population is also disposed of in the same manner as the dung. In addition farmers apply inorganic fertilizers, topping the already over-fertilized soils. The result is a strong leaching of phosphorous from the local watershed into the reservoir during the rainy season in the summer when conditions are ideal for algae blooming in the reservoir.
The agricultural literacy of the farmers is limited, based predominantly on indigenous knowledge developed through times that were quite different from the current situation with effulge of nutrients. The sound traditional agricultural practice of circular economy – using waste as a resource – thus generates an environmental problem.
The social science studies indicate that most local farmers are conscientious of the environment and adhere to an eco-friendly worldview, aware of the eutrophication problem and possibly the link to their actions – but what shall they do?

Using a DPSIR approach on its eutrophication problem we are achieving a conceptual geochemical process understanding of fluxes of bio-available nutrient fractions. This is used to adapt, parameterize and optimize existing catchment and lake models to simulate environmental response to changes in pressures. In concluding, the societal response to how local and provincial government deal with eutrophication is studied. The project is thereby compiling research and monitoring, building on conclusions and identified knowledge gaps, and bringing the science another step towards more policy relevant knowledge.

The aims are to:

The subsequent aim is to facilitate development of sustainable management practices by achieving a better understanding of societal response to implied abatement strategies. 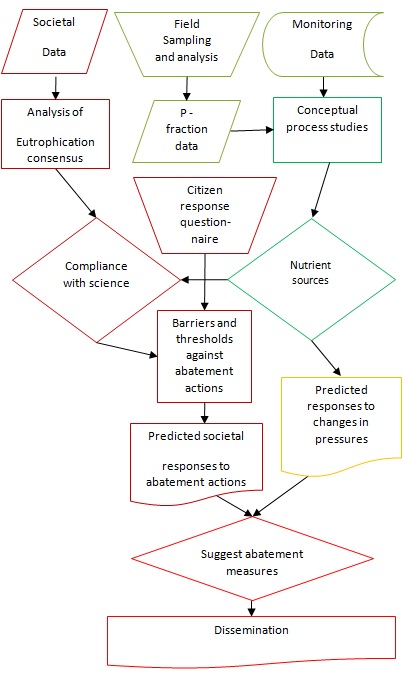 The project is organized into five integrated work packages

• WP2 Catchment processes - the influence of land-use and climate on nutrient fluxes into aquatic systems.

Societal response
- Knowledge of stakeholder interests will be essential for the success
of the overall public policies
- Knowledge and the process of learning, not just incentives, constitute a necessary basis for facilitating collective action and public policies, ultimately contributing to sustainable environmental development.

Two PhD students and three Master students are involved in the project. The labs at RCEES and TAES have been provided training.

Training and Performance test of phosphorus analysis at RCEES and TAES is completed.

Water chemistry and algae in tributary streams to the reservoir are monitored (287 samples) focusing on capturing runoff episodes. All water samples were analayzed for P fractions as well as pH, conductivity, absorbency, alkalinity and major anions and cations (Ca2+, Mg2+, Na+, K+, SO42-,  NO3- , Cl-). Passive samplers (60) for bio-available P are used in 7 sites in the watershed and 2 sites in the reservoir. Daily Water level and suspend solid at Xiaojuge Bridge, Lin river Bridge and Beixinzhuang Bridge, from 2012-08-01 to 2013-12-01.

Water quality, phytoplankton dynamic biomass, nutrients, ions etc. were monitored from Feb.~2012 to Apr.~2014 for 13 sites in the reservoir and 2 sites in the two main inlets.  Bathymetry of the reservoir has been measured. Profiles of water temperature and underwater avaiability in two sites were monitored using online sensors in 2013; high turbidity and nutrient loading from two main inlets resulted in low water transprency and high phytoplankton biomass in the east reservoir. No siginificant spatial variances of metal ions were showed in 2013. The Maximum biomass were detected in Sepetember of both 2012 and 2013. In total of 63 phytoplankton species/genus were collected in the reservoir from 2012 to 2013, among of which, Microcystis sp. Cyclotella sp.  Synurid sp., Synedra sp. and Phormidium sp. were dominated in the reservoir during different seasons. Both
Phormidium sp. and Cyclotella sp. were regarded harmful algae and should be pay more attention, as they could potentially produce odorous compound 2-MIB (2-methylisoborneol) and cause filter clogging in waterworks, respectively.

Efforts for data generation are increased to compensate for lack of historical data: Two sets of temperature and light intensity loggers (16) were installed in the reservoir, though lost after short time.

Parameters are considered as explanatory variables for P flux such as the land-use and P in soil. Risk of P loss from the watershed is assessed using a modified P index extracted from the individual village units. Degree of soil P saturation is combined with a source factor system (RUSLE) on an ArcGIS platform to assess spatial distribution for risk of P loss. Accuracy of the prediction is validated by comparing average P index value for each sub-catchment with measured flux of P fractions at the outlets.

Statistical analyses of survey questionnaire (545 in 11 villages) among farmers have been conducted on survey topics: environmental values/attitudes; place attachment; learning and knowledge about farming and the use of fertilisers; and water resource issues. Selection of independent variables for multivariate analyses is challenging as many are co-related, though reasonable combinations are identified. Whether to use categorical regression models, or transform the dependent categorical variables into numerical variables and then use traditional linear regression models, is tested. Face-to-face interviews (47) have been conducted in predominantly cereal village, pig village, fishing village and in an orchard village.

Ji county local authorities are developing a pollution control plan for the reservoir. Knowledge and understanding regarding nutrient management generated from the SinoTropia project has been applied in the planning process. In particular, non-point source pollution assessment and the nutrient management practice have led to increased attention to control the P flux from the local area.