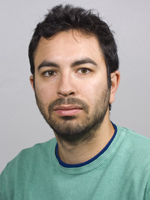 I'm a PhD student working under the project called CONFINE in Catalysis section of the University with Mohamed Amedjkouh as supervisor. My interest is directed to asymmetric catalysis, and especially the Soai reaction's asymmetric autocatalytic system. My work is dedicated to the search of novel approach to trigger the Soai reaction exploiting the framework of UiO series of MOF.

2015-2016: State examination enabling to work as a pharmacist