The overarching goal of the project is understanding the workings of the energetic Sun. 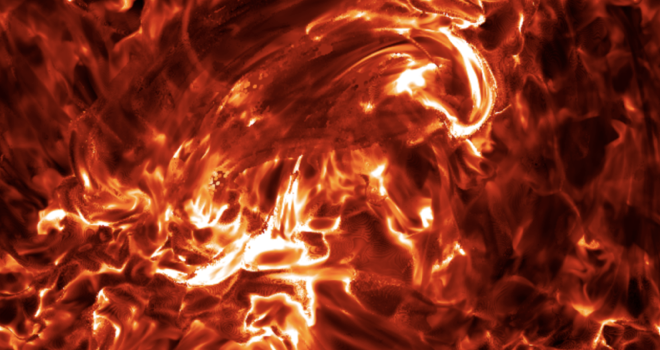 Bifrost 3D simulation of an active region on the Sun as a telescope would see it in the spectral line from singly ionized magnesium at a wavelength of  279.6 nm. Image: RoCS.

Researchers at the Rosseland Centre for Solar Physics will push the boundaries of solar physics by exploiting and extending the unique combination of cutting edge expertise in observations and numerical simulations at the Institute of Theoretical Astrophysics, University of Oslo.

The importance of magnetic fields

Solar magnetism lies at the root of most solar and heliospheric physics. The intricate structure and dynamics of the solar field and its influence on the heliosphere represent major quests of (astro-)physics, which bear directly on the human environment. The magnetic field is generated by enigmatic dynamo processes in the solar interior and is organized into the complex patterns of activity observed in the solar photosphere. The field dominates the energetics of the outer solar atmosphere (chromosphere, transition region, corona), regulates the solar wind, and affects the extended heliosphere into the Earth's upper atmosphere.

We will achieve a coherent picture of these complex physical processes through confronting state-of-the-art 3D numerical models of the entire region from the upper convection zone to the corona with comprehensive observations of the entire solar atmosphere from a powerful suite of new observatories. We will exploit the recent advances in supercomputing and expand our current computational capabilities beyond the state of the art by implementing new research methods such as multi-fluid and particle-based models.