Here is a list of relevant research topics investigated in the hydrodynamics laboratorium. 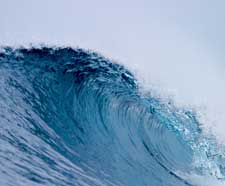 In physics, a breaking wave is a wave whose amplitude reaches a critical level at which some process can suddenly start to occur that causes large amounts of wave energy to be dissipated. At this point, simple physical models describing the dynamics of the wave will often become invalid, particularly those which assume linear behavior.

The most generally familiar sort of breaking wave is the breaking of water surface waves on a coastline. Because of the horizontal component of the fluid velocity associated with the wave motion, wave crests steepen as the amplitude increases; wave breaking generally occurs where the amplitude reaches the point that the crest of the wave actually overturns. Certain other effects in fluid dynamics have also been termed "breaking waves", partly by analogy with water surface waves.

Current research projects for surface waves are: Breaking waves on beaches; an experimental and numerical study. This is lead by our staff Geir Pedersen, Atle Jensen and Gunnstein Sælevik. 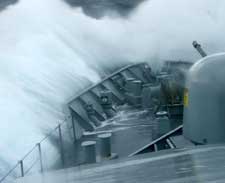 Violent impact of water waves on structures will cause large damages from the huge forces from the waves. The impact create velocities and pressures that are a lot larger than kinematics and dynamics which are associated with ordinary gravity waves.

This is being lead by our staff Atle Jensen and Geir Pedersen. 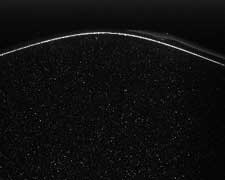 Internal waves are gravity waves that oscillate within, rather than on the surface of, a fluid medium. They arise from perturbations to hydrostatic equilibrium, where balance is maintained between the force of gravity and the buoyant restoring force. A simple example is a wave propagating on the interface between two fluids of different densities, such as oil and water. Internal waves typically have much lower frequencies and higher amplitudes than surface gravity waves because the density differences (and therefore the restoring forces) within a fluid are usually much smaller than the density of the fluid itself. Internal wave motions are ubiquitous in both the ocean and atmosphere.

Multiphase flow is an area of research that has applicability in many fields. Loosely defined, multiphase flow is a flow which consists of two or  more elements in different phases be it solid, liquid, or gas. Cavitation, pneumatic transport, fluidized beds, and pipe transport are examples of problems of interest in industry. These types of problems also occur in nature; avalanches, bubbly flows, aerosols and sea-spray, and sediment transport are some examples. 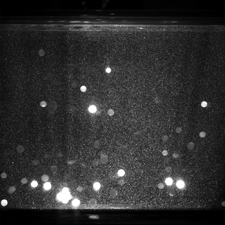 An image taken from a two-phasepipe flow at a Reynolds number of43,000 based on the pipe diameter andbulk velocity. The flow is from left toright and the large particles are 950micron polystyrene spheres. Thesmaller particles are 20 micron tracerparticles used in a PIV system tomeasure the carrier phase fluidvelocity.

We have an interest in topics related to multiphase pipeflow, specifically liquid-air and solid-liquid flows. For two-phase air-water flow we conduct experimental work on droplet generation at the interface and its subsequent transport. We also have an interest in studying the formation and dynamics of slugs, which are phenomena in which the liquid phase encompasses the entire pipe diameter. Solid-liquid flows can be used to study sediment transport in a hydrocarbon pipeline when dense (i.e. they have inertia) particles are placed into the pipe. Additionally, experiments such as these also allow for investigations into the underlying physics of how particles move in a turbulent flow.

The interaction between particles is not a simple one-way coupling. The fluid affects the particle motion and the particle motion in turn affects the carrier fluid. The presence of particles can enhance or suppress turbulent motion in the fluid when compared to the unladen case. The exact mechanisms which cause and drive the enhancement or suppression of turbulence is not well known and will continue to provide research opportunities in the future.

As computing power becomes more powerful, the ability to simulate such flows becomes easier. However current DNS schemes are limited by a trade-off in resolution and xx. The state of the art in channel flow can handle Re = xx; with current imaging technology we can collect spatial velocity data at Re = O(100,000). Even for flows that can currently be modeled, high-quality experimental measurements of such flows are essential for validation and testing.

The current research projects are in combined PIV-PTV measurements of two-phase pipe flow. The project at the university is being undertaken by David Drazen and Atle Jensen and is being conducted in partnership with the Institute for Energy Technology (IFE). The goal of the project is to better understand the dynamics of these flows in order to further improve 1-D transport models for hydrocarbon pipelines.

Impulse waves generated by falling rock masses can sustain huge amplitudes if the rock masses fall into a geometrically confined water body, such as dams, lakes and fjords. The potential disaster for settlements along the shore of such a confined water body is obvious if impulse waves can be generated in the vicinity. An example of such a disaster is the 1934 Tafjord rockslide, killing 34 people in the Tafjord settlement in Western Norway when a huge rock fell into the fjord.

Current research projects for slide-generated waves are: The Åkerneset project and the planning of future experiments for the possible La Palma failure. This is being lead by our staff Atle Jensen, Geir Pedersen and Gunnstein Sælevik, and partnered with Sintef Coast and Harbor Laboratory and the Åkerneset municipal project.

It is difficult to give a general and precise definition on what wave motion is. But a wave is a signal that propagates from one position in a media to another with a characteristic speed. These waves can be very different and how they are generated is dependent on in which fluid they appear. 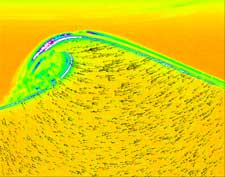 However, water waves can be caused by gravity or surface tension and surface waves in the ocean or the atmosphere can be generated by the earth’s rotation. Even though the properties are very different, a lot of the mathematical models that are used worldwide are the same.

In the last decade the non-intrusive measurement technique PIV has experienced a rapid improvement in both accuracy and temporal resolution. Our current aim is to investigate the possibilities and limitations of PIV to a complex flow.

This vector plot is a zoom in of the turbulence in the wake of a towed grid.

We are specifically interested in the case of grid generated turbulence, since this case has got both well established theoretical solutions as well as a multitude of experimental results for comparison. The flow is close to isotropic and homogeneous turbulence. The spatial nature of the PIV method opens for comparison of characteristic length scales and energy spectras with the classical results obtained from point measurements.

Current research projects for turbulence measurements are the investigation of possibilities and limitations of PIV measurements of grid generated turbulence. This is being lead by our staff Arnaud Sanchis, Gunnstein Sælevik and Atle Jensen.

Vortex Induced Vibration (VIV) are motions induced on bodies facing an external flow by periodical irregularities on this flow. The classical example is the VIV of an underwater cylinder. You can see how this happens by putting a cylinder into the water (a swimming-pool or even a bucket) and moving through the direction perpendicular to its axis. Since real fluids always present some viscosity, the flow around the cylinder will be slowed down while in contact with its surface, forming the so-called boundary layer. At some point, however, this boundary layer can separate from the body because of its excessive curvature. Vortices are then formed changing the pressure distribution along the surface. When the vortices are not formed symmetrically around the body (with respect to its midplane), different lift forces develop on each side of the body, thus leading to motion transverse to the flow. This motion changes the nature of the vortex formation in such a way as to lead to a limited motion amplitude (differently, then, from what would be expected in a typical case of resonance). 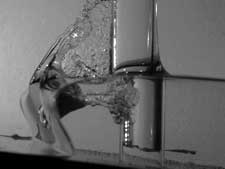 VIV of ocean structures is a major factor affecting all stages of development of offshore structures (conceptualization, design, analysis, construction and monitoring) and governs the arrangement of risers, details during fabrication, method of installation and instrumentation. Advances to deeper waters in search for crude oil has resulted in multi-billion dollar offshore projects. Under such water depths, long flexible cylinders are increasingly required (umbilicals, risers, conductor tubes, pipeline spans), and prediction of VIV response is increasingly important. A recent estimate by British Petroleum puts the estimated cost of countering VIV to approximately 10% of the project cost.

Current research projects for VIV are: Fluid flow mapping and amplitude measurements of a system with variable mass ratio. This is being lead by our staff, Arnaud Sanchis, Gunnstein Sælevik, John Grue and Atle Jensen