An astronomer from Paris

- It did not take me a long time to accept the invitation to work with RoCS.  I’ve always thought that the group was no less than world-leading in its field, says Guillaume Aulanier who newly joined the Centre of Excellence at UiO. 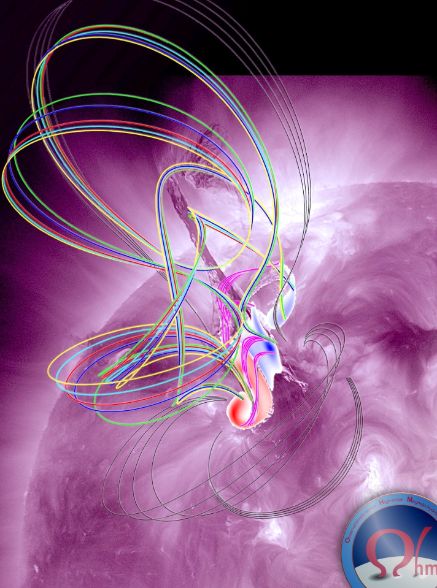 - What is your name, your nationality and your educational background?

- My name is Guillaume Aulanier, and I am French (don’t be alarmed by the spelling, my first name should simply be pronounced ghee-yohm). I am employed by Paris Observatory on a tenured astronomer position (which is more-or-less equivalent to that of a full professor).

I obtained my BSc and the first-half of my MSc in fundamental physics from what is now the Université de Paris, and then I was awarded my MSc and PhD in astrophysics by what is now Sorbonne Université. I actually prepared my PhD at Paris Observatory in Meudon, which is now a school of the Université Paris Sciences et Lettres.

- Where have you studied/worked before and in what field? What are the differences from or similarities to your current project?

- That’s a good question!  My university curriculum was mostly focused on so-called modern physics. As such, I received hardly any fluid mechanics training (albeit for one short course and an internship on star formation). Also, I felt so little acquaintance with my BSc maths and electromagnetism courses that I had sworn to myself never to work in either of these two disciplines later. In addition, my astrophysics master was mostly focused on instrumental and night-time observational techniques, so I had zero course in solar physics (the field was barely taught anywhere at the time, a deficiency which is now fortunately corrected).

How’s that for starting a PhD in theoretical solar magnetohydrodynamics…?

I have been very lucky all along the way to benefit from the outstanding training of several supervisors, in particular S. Antiochos, J.-P. Chièze, P. Démoulin, R. Grappin, and B. Schmieder. I would not be here today without all of them.

After my first postdoc in Washington DC, I came back to Meudon and stayed there for twenty years. During all this time, I stayed in solar physics, working on the development of the OHM code and addressing various topics: primarily prominences, flares and CMEs; but also, subsurface flux transport, sunspot stratification, Ellerman bombs, untwisting jets, coronal outflows...

Over the last decade, I have been focusing on a long-duration project, which has been supported by several research contracts, and which has benefited from many fruitful collaborations with great PhD students, postdocs, and more senior colleagues: the implementation of a three-dimensional standard flare-model.

- When did you start working at RoCS?

- I officially joined The Rosseland Centre for Solar physics in January 2021 as an adjunct professor.

- What are you going to study?

- The main goal I’ll be pursuing with the group at RoCS will be to extend our understanding of the coupling of solar atmospheric layers in flaring active regions.

There are many aspects to this topic. So, it is difficult to foresee which ones we will address in details. Nevertheless, I am already thinking about addressing the following outstanding questions:

But anyway, I’ve always been very open to contributing to projects which I had never thought of before. In this line, I tend to believe that the most interesting results that I obtained throughout my career, thus far, arose more from serendipity and slow maturing than from detailed pre-established projects and workplans. So, I’m sure I’ll be interested in many of the group’s ongoing projects.

- How do you plan to answer to the main question?

- The science questions which I mentioned above are among the most challenging of modern solar physics. They are also quite sensitive on the societal level, given their implications on our ability to predict space weather. This is a major issue for nowadays technological societies and space applications in general, and for high-latitude countries such as Norway in particular.

Thus, I suppose we’ll need to share our expertise and push them beyond their limits, not only on solar magnetism and radiation, but also on low atmospheric and coronal physics. We may have to learn new ways to couple the physics and/or the numerics of the BIFROST code from RoCS, and the OHM code from France, and to couple them tightly with multi-wavelength observations of all the Sun’s layers.

- What brought you to Oslo? Why RoCS and Norway in general?​

- I’ve been solicited by the director of RoCS, who asked me if I’d be willing to join the group as a temporary adjunct professor to work on active region physics.

It did not take me a long time to accept this invitation. Not only because I had already learned to value the group when we shared a European contract more than ten years ago. But also -and mostly - because I’ve always thought that the group was no less than the world-leader in chromospheric physics and its couplings with the Sun’s overlying and underlying atmospheric layers.

So, it is the science and the group’s reputation that brought me to you.

- How can you describe your experience here so far?

- Thus far I’ve already been impressed with the liveliness of the group, with its active scientific animation, even with the purely online format.

- What do you expect from this experience?

- I see the opportunity to start a sustained research collaboration. Maybe on the long run we’ll also be able to exchange students, including at the master level. Of course, I am also looking forward to discover the city and the country when the covid crisis is over.